Saint Sophronius, Bishop of Irkutsk and Wonderworker of All Siberia (+ 1771)

Saint Sophronius, Bishop of Irkutsk and Wonderworker of all Siberia, whose family name was Kristalevsky, was born in Malorussia in the Chernigov region in 1704. His father, Nazarius, was “a common man in his affairs,” and the Saint was named Stephen, in honor of Saint Stephen the Protomartyr. He had two brothers and a sister, Pelagia. The name of one brother was Paul. The name of the other older brother is unknown, but it is said that he was head of the Krasnogorsk Zolotonosh Monastery.
Stephen’s childhood years were spent in the settlement of Berezan in the Pereyaslavl district of the Poltava governance, where the family settled after the father was discharged from service. When he came of age, Stephen entered the Kiev Theological Academy, where two other future hierarchs were studying: Joasaph, future Bishop of Belgorod (Sept. 4), and Paul, future Metropolitan of Tobolsk (June 10).
After completing his religious education, Stephen entered the Krasnogorsk Transfiguration Monastery [later renamed the Protection Monastery; in 1789, it was transformed into a women’s monastery], where his elder brother already labored in asceticism. On April 23, 1730 he received monastic tonsure with the name of Sophronius, in honor of Saint Sophronios of Jerusalem (Mar. 11).
On the night after his monastic tonsure, Saint Sophronius heard a divine voice in the Protection Church predicting his future service: “When you become bishop, build a church dedicated to All Saints.”
In 1732, he was summoned to Kiev. There he was ordained hierodeacon, and then hieromonk in the Cathedral of Holy Wisdom. After Saint Sophronius had been a monk for two years, he became treasurer of the Zolotonosh Monastery for two years, and then Bishop Arsenius (Berlov) of the Pereyaslavl diocese sent him into the house of his archbishop, where he was steward for eight years.
These facts testify to the connections of the Saint with his original Protection Monastery. During his obedience under the presiding hierarch at Pereyaslavl, he often visited his monastery, spending the day in quiet contemplation and work, serving as an example to the brethren.
When Hieromonk Sophronius traveled to the Holy Synod on behalf of his bishop, they paid close attention to him. In January 1742, the Saint was transferred to the Saint Alexander Nevsky Lavra in Saint Peterburg, the foremost monastery of the capital. A year later he was appointed treasurer of the monastery, and in 1746 he was appointed as superior of the monastery.
He summoned his fellow countryman, the hieromonk Sinesios (Ivanoff), a native of the city of Priluki, and made him superior of the Saint Sergius Hermitage, a dependancy of Saint Alexander Nevsky Lavra. From this time the friendship of the two ascetics, hieromonk Sophronius and hieromonk Sinesios, was strengthened by their joint pastoral effort, and they were inseparable until they died in Siberia.
During these years Saint Sophronius worked hard at managing the monastery and improvement of teaching at the seminary located nearby. He and Archbishop Theodosius made it their task to acquire more books for the monastic library.
Saint Sophronius built a two storey church: the upper church was dedicated to Saint Theodore, the older brother of Saint Alexander Nevsky; and the lower to Saint John Chrysostom.
Bishop Innocent II (Nerunovich) of Irkutsk died in 1747. For six years afterwards, the Irkutsk diocese remained without a spiritual head.
Finally, on February 23, 1753, the empress Elizabeth (1741-1761) recommended the pious abbot Sophronius of the Alexander Nevsky Monastery to the Holy Synod as “a person, not only worthy of episcopal rank, but also someone completely able to fulfill the wishes and the hopes of the state and the Synod, and take up the burden of episcopal service on the far frontier and satisfy the needs of his flock in that harsh land, among wild primitives and lawless people.”
On April 18, 1753, Thomas Sunday, Hieromonk Sophronius was consecrated Bishop of Irkutsk and Nerchinsk in the Dormition Cathedral.

A local Council of the Russian Orthodox Church in its deliberations of April 10/23, 1918 decided to glorify Bishop Sophronius, numbering him among the holy saints of God. This solemnity of adding Saint Sophronius to the list of the saints was done on June 30. At a second session of this Council under the presidency of His Holiness Patriarch Tikhon (now Saint Tikhon) a Service to Saint Sophronius was approved, with a Troparion composed by Archbishop John, who at that time guided the Irkutsk diocese, so that all believers would have the possibility of adding prayer to the holy saint into the voice of the Siberian churches, deeply venerating the memory of their illuminator and intercessor.

And at the present time believers turn for help to Saint Sophronius. Prayers witness to this, having been composed on the day of the 40th year celebration of the glorification of the holy hierarch on June 30,1958, by Metropolitan Nestor (Anisimov), then Metropolitan of Novosibirsk and Barnaulsk, and a solemn feast of the 200 year anniversary of the day of death of Saint Sophronius took place at the Zolotonoshsk Krasnogorsk women’s monastery and in the Irkutsk diocese (Journal of the Moscow Patriarchate, 1971, No. 9), and he is venerated by all believers of the Russian Orthodox Church. 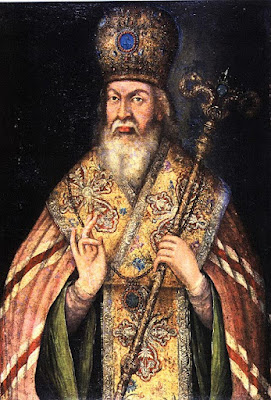 Apolytikion in the Fourth Tone
From thy youth thou hast loved Christ, O blessed Sophronios, and didst govern monastic establishments well; and being honored with hierarchal rank, thou hast kept watch over the flock of Irkutsk. Thus, after thy repose, thou hast received the gift of miracles from God, and now pray to Christ God to deliver us from misfortune, and to save our souls.
Kontakion in the Fourth Tone
Let us, O believers, extol with love the Hierarch and namesake of wisdom, the special adornment of the Church of Irkutsk, our Father Saint Sophronios, for he is the guardian of that city and country and a suppliant for our souls.