Peasant Faith: Three True Stories of the Power of Simplicity 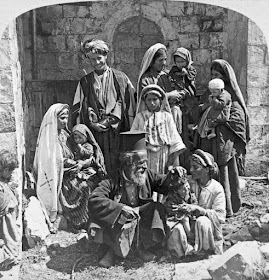 Saint Paisios the Athonite (+ 1994) spoke of a simple monk with child-like faith. He wrote: "A simple but holy man, when he once had to take care of a poor sick person, went down to the seashore to the Church of the Ascension and lifted up his arms and prayed: 'My Holy Ascension, give me a little fish for my sick charge.' And - O the miracle! — a fish came into his hands! He cooked it and thanked God and Holy Ascension." Not understanding the theological term "Ascension", which refers to the ascent of Christ into heaven forty days after His resurrection, this simple-minded monk believed he was invoking the intercessions of a female Saint named "Ascension". This story teaches us that a natural simplicity with deep faith becomes sanctification in a natural way.
An illiterate woman from a village in Corinth would pray, "Holy God, Holy Weather, Holy Death, have mercy on us!" and her face would shine with God's grace. Being illiterate, she had misunderstood the words she heard in church, and instead of "Ischyros" which is translated as "Mighty", she heard "O Kairos" which is translated as "Weather", and instead of the word "Athanatos" which is translated "Immortal", she heard "O Thanatos" which is translated as "Death". Despite this confusion of terms, her prayer was grace-filled.
A simple-minded mother said to the priest of her village: "My Father, I brought to you my child so you can read a prayer over him, because he does not have an appetite (ὄρεξη, orexi)." So the priest, who was also simple-minded, found a prayer in the priestly book of prayers for the "opening of a well" (ὀρύξει φρέατος, oryxei freatos), and prayed over the child. The priest saw the similarity of the words orexi (appetite) and oryxei (opening) and thought they were the same, but God, who knows the intent of the heart, worked His miracle, and the appetite of the child opened!