Saint Euphrosynus of Blue Jay Lake (Sinozersky), in the world Ephraim, was born in Karelia near Lake Ladoga in the second half of the sixteenth century. His father's name was Simeon, but his mother's name has not come down to us. In his youth he lived near the Valaam Monastery, perhaps as a novice, until it was captured and ransacked by the Swedes. Later he moved to Novgorod the Great. After he spent some time there, the Saint then withdrew to one of the Novgorod outskirts, the Bezhetsk “pentary” [one fifth of the “Pyatiny Novgorodskiya,” comprising five outlying districts of Novgorod the Great].
He became a Reader in the Church of Saint George the Great Martyr and Saint Nicholas the Wonderworker in the village of Doloska, twenty versts from the city of Ustiuzhna of Zhelezopolska. He was tonsured at the Tikhvin Dormition Monastery. In 1600 he began his wilderness life in the wild marshlands on the shore of Blue Lake. Here the Saint set up a cross and dug a cave. The Saint lived here for two years, eating only wild vegetation. 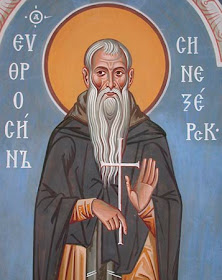 Unexpectedly, people from neighboring villages found him, and they began coming to him for guidance, and several remained to live with him. In 1612, when Polish military detachments were laying waste to Russia, many people were saved by hiding at his wilderness monastery. 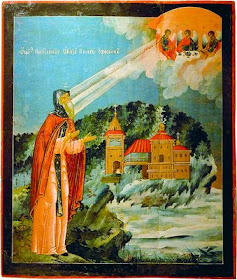 Saint Euphrosynus predicted that the Poles would come into this wilderness, and he advised everyone to flee. Many did not believe him. “Why then don’t you leave this place yourself?” they asked. The Elder replied, “I have come here to die for Christ.” Those who obeyed the Saint and left the monastery were spared, but all those who stayed died a horrible death. 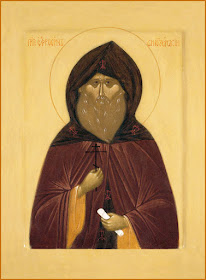 Saint Jonah had also been one of the inhabitants of the monastery. Terrified by the prediction of Saint Euphrosynus, he wanted to flee with the others. But Saint Euphrosynus held him back, inspiring the monk with zeal for the house of God and a readiness to remain in the monastery until his death.
“Brother Jonah,” said Saint Euphrosynus, “why this cowardly fear in your soul? When the battle begins, then courage must be shown. We vowed to live and die in the wilderness. We must be faithful to our word, given before the Lord. In such a case, death results in peace. It is another matter for the laity. They are not bound by their word, and they must spare themselves for the sake of their children.” 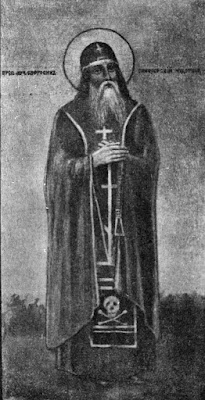 After this Saint Euphrosynus dressed himself in the schema, and spent the whole night in prayer. On the following day, March 20, Polish forces fell upon the monastery. Attired as a schemamonk, the Saint emerged from his cell and stood with upraised cross. The enemy said to him, “Old man, give us the monastery’s valuables.”
“All my possessions, and those of this monastery, are in the Church of the All-Pure Mother of God,” he replied. He was referring to spiritual treasures which cannot be stolen. Not understanding this, the thugs rushed to the church, and one of them drew a sword and struck Saint Euphrosynus on the neck. His neck was cut half way through, and the holy Elder fell to the ground dead. When the Poles returned, angered that they had found nothing in the church, one of them struck the Saint’s head with an axe. Saint Jonah also perished in the attack. 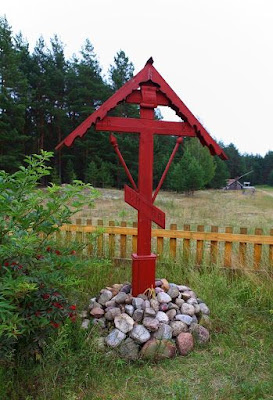 A certain pious Christian, Ioann Suma, had also stayed at the monastery with the monks. When the Poles burst onto the scene, he was in the Saint’s cell. Despite the grievous wounds he received from these ruffians, Ioann remained alive, but unconscious. After the departure of the Poles, he regained his senses and told his son Emilian what had transpired.
The nearby inhabitants learned from them about the destruction of the monastery and the martyric death of Saint Euphrosynus. The Saint’s body was reverently buried on March 28. On this same day they also buried Saint Jonah and all the others who had perished under the sword. 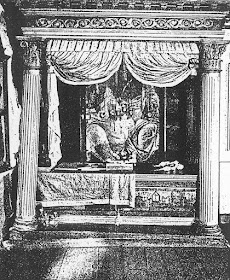 Thirty-four years after the death of the Saint, a new church was built by a certain Moses, and dedicated to the Most Holy Trinity. With the blessing of Metropolitan Macarius of Novgorod, the incorrupt relics of Saint Euphrosynus were transferred to a new reliquary beneath the belfry of the Annunciation Church on March 25, 1655.
The Venerable Martyr Euphrosynus was glorified by the Russian Orthodox Church on June 29, 1912. In 1913, after canonization, for the relics of the Saint a new bronze coffin was built, standing in the chapel under the bell tower.

Divine service in the Trinity-Annunciation Church took place until 1933. In the same year, after the closure of the temple, the coffin with the holy relics entered the Ustyuzhensk Museum of Local Lore. In 1936, the relics were uncovered, exhibited for some time in the anti-religious exposition of the museum, then kept in stock; in 1954 the coffin of 1913 was made into scrap metal. On June 14, 1991, the holy relics of Euphrosynus were handed over to the Russian Church, and now they are resting in the aisle of the Kazan Church in Ustyuzhny.