Verses
With the marks of an athlete Theodotos approached,
And Christ received you in peace.
This Saint contested when Licinius was emperor and Sabinus was governor of Cyprus in the year 320. Saint Theodotos was a native of Galatia and later became Bishop of Kyrenia in Cyprus. He openly preached Christ, calling on the pagans to abandon idolatry and turn to the true God.
Sabinus ordered that Bishop Theodotos be arrested and brought to trial. When he heard about this order, the Saint did not wait for the soldiers to be sent after him, but immediately went to the governor saying, “I, whom you seek, am here. I have shown myself in order to preach Christ my God.” 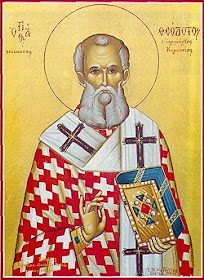 Because of his confession and faith in Christ, first he was flogged with ox-hide, then he was suspended and his flesh was lacerated. After this he was spread out on a red-hot iron bed. Having been preserved unharmed from the fire by the grace of God, his feet were pierced with nails, and like this he was forced to walk, then he was thrown in prison.
After the death of Licinius, the persecution against Christians ceased. The Saint was therefore freed from prison on January 19th. Two years later he departed to the Lord on March 2nd in the year 326. His Synaxis in Constantinople was celebrated in the small Church of our Most Holy Lady the Theotokos, which is located in the place called Armatios.

Apolytikion in the Fourth Tone
By sharing in the ways of the Apostles, you became a successor to their throne. Through the practice of virtue, you found the way to divine contemplation, O inspired one of God; by teaching the word of truth without error, you defended the faith, even to the shedding of your blood. Hieromartyr Theodotos, entreat Christ God to save our souls.
Kontakion in the Third Tone
By exposing the seas of false belief, thou didst capsize the godless pride of idolatry, through the strength of the Orthodox faith, becoming thyself a burnt offering to the Lord. Showering thy miracles now upon the earth, O holy hierarch, father Theodotos, entreat Christ God that He grant us great mercy.