The Burial of Saint Savvas the Sanctified 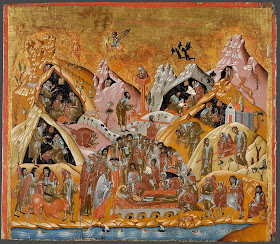 By Cyril of Scythopolis
(Life of Savvas, Ch. 77)
So it was that our father Savvas, after fighting the good fight, completing the race, and keeping the faith, was adorned with the crown of righteousness. His death occurred on 5 December of the tenth indiction, in the year 6024 since the creation of the world, when time began to be measured by the course of the sun and in the year 524 since the Word of God became man from the Virgin and was born in the flesh, according to the chronologies composed by the holy fathers Hippolytus the Ancient, the disciple of the Apostles, Bishop Epiphanios of Cyprus, and Heron the philosopher and confessor. The chronology of his life in the flesh is as follows. He came to Palestine at the age of eighteen and lived seventeen years in the cenobium and passed fifty-nine years in the desert of the Great Lavra. He died in the ninety-fourth year of his life, in the second year after the consulship of Pampadius and Orestes and in the sixth year of the present divinely protected reign.
The news of his death circulated through all the surrounding region and brought together an immense crowd of monks and lay people. The most holy archbishop Peter also arrived with the available bishops and the leading men of the holy city. And so his precious remains were laid to rest in the Great Lavra between the two churches, in the spot where he had seen the pillar of fire. This saint did not die, however, but is asleep, having lived an irreproachable life and been pleasing to God, as it is written, "The souls of the just are in the hand of God and death shall never touch them." Certainly his body has been kept sound and incorrupt to this day. This I witnessed with my own eyes in the recent tenth indiction.