Saint Stephen the Confessor, Archbishop of Surrentium (Sourozh), was a native of Cappadocia and was educated at Constantinople in the eighth century. After receiving the monastic tonsure, he withdrew into the wilderness, where he lived for thirty years in ascetic deeds.
Patriarch Germanos of Constantinople (May 12) heard of Stephen’s humility and virtuous life, and wished to meet him. He was so impressed with Stephen that he consecrated him Bishop of the city of Surrentium (presently the city of Sudak in the Crimea). Within five years, Saint Stephen’s ministry was so fruitful that no heretics or unbaptized pagans remained in Surrentium or its environs.
Saint Stephen opposed the iconoclasm of the emperor Leo III the Isaurian (716-741). Since he refused to obey the orders of the emperor and the dishonorable Patriarch Anastasios to remove the holy icons from the churches, he was brought to Constantinople. There he was thrown into prison and tortured. He was released after the death of the emperor. Already quite advanced in years, he returned to his flock in Surrentium, where he died.
There is an account of how the Russian prince Bravlin accepted Baptism at the beginning of the ninth century during a campaign into the Crimea, influenced by miracles at the Saint’s crypt. 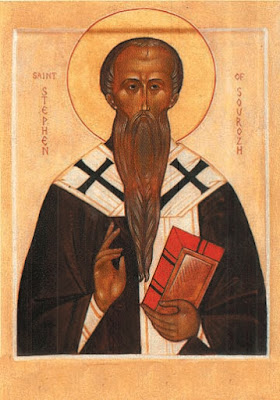 Apolytikion in the Fourth Tone
Solitary dweller with the Bodiless Hosts, thou didst take the Cross as thy weapon and stand firm against the Iconoclasts and Macedonians; they would not venerate the icon of Christ our God, but thou didst cut out all wicked heresies. Then as one who had received the martyr's crown, thou didst deliver thy city, Sourozh, from all enemies. And now we implore you, O Stephen, that we may be delivered from temptations and eternal torments.
Kontakion n the Third Tone

Strengthened by the power of the Most High God, thou didst overcome the iconoclasts of the royal house. Today the glory of thy relics belong to Sourozh and to us faithful, and the Angelic Orders bear them triumphantly. With songs and hymns they glorify thee, O great Saint Stephen.