Saint Joasaph of Kubensk, Wonderworker of Vologda, was baptized with the name Andrew. His parents, Prince Dimitri Vasilievich of Lesser Zaozersk (a descendant of Prince Theodore Rostislavich of Smolensk and Yaroslavl), and Princess Maria, were known for their deep piety, which they imparted to the future ascetic. In 1429 Prince Dimitri Vasilievich was killed in Yaroslavl by Kazan Tatars during their raid on the Volgda cities. Andrew was probably a baby at the time, and his mother Princess Maria was left ti raise him along with his two brothers Symeon and Theodore and one sister Sophia.
About seven years later Princess Maria came down with a fatal disease, for which she sought the prayers and healing from Saint Alexander Kushtsky, but he responded that it was God's will that she die from this disease. This left Andrew an orphan. Furthermore, the husband of his sister Maria, Dimitri Yurievich Shemyaka, started a quarrel with the Grand Duke of Moscow Vasily Vasilyevich. After Dimitri had Vasily blinded, Vasily had Dimitri poisoned, and he gave the principality of Zaozersk to two princes. Thus the children of Prince Dimitri Vasilievich lost their lot and ceased to be sovereign princes. 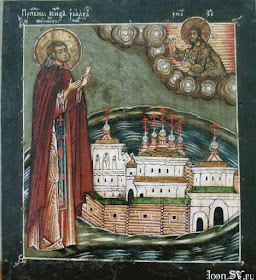 Early orphanhood, deprivation, though small, of the princely inheritance, a pious education and in particular respect for the monastic way of life – all this led the God-fearing youth of Prince Andrew Dimitrievich to the consciousness of the perishability and temporality of everything earthly. At twenty years of age, in 1452, Prince Andrew entered the Kamenny Monastery of the Savior at Kubensk under Abbot Cassian. At first the abbot was afraid of the wrath of the Grand Duke of Moscow, but with the persistent entreatities of the Prince he was accepted and soon tonsued with the name Joasaph, in honor of Saint Joasaph, the Prince of India.
Saint Joasaph gained a good reputation for himself by complete obedience, keeping the fasts, by his zeal in prayer, and love for books. The brethren of the monastery were amazed at the gracious meekness and humility of the young ascetic. Under the spiritual nurture of the experienced Elder Gregory, afterwards Bishop of Rostov, Saint Joasaph progressed in virtue despite his youth. He led the life of a reclusive hermit in his cell and attained to a high spiritual level. Saint Joasaph lived an ascetic life at the Kamenny Monastery of the Savior for five years. 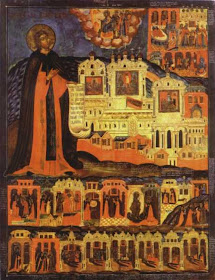 Sitting one day in his cell, Saint Joasaph was singing the Psalms of David. Then our Lord Jesus Christ appeared to him and said: "Peace be unto you, My beloved!" The monk was filled with fear and trembling and asked: "What is the reason for Your appearance, Lord?" "Do you see this surrounding wilderness," the Lord said to him, "for your sake I will fill all of it with desert-dwellers, glorifying My name." Joasaph asked the Lord what real weapon was to defeat the enemy of our salvation, and learned that the fulfillment of the commandments of God is most crucial.
In the final year of his life, Joasaph became very sick despite his young age, and he partook of food only once during the week and received the Holy Mysteries each Sunday. Before his death, Saint Joasaph took leave of the brethren, consoling and admonishing the monks not to grieve over his departure. When the brethren gathered in his cell, the venerable one advised them to avoid all disputes and disagreements and asked that the Prayers for the Departure of the Soul from the Body be read. He prayed to the Lord and to His All-Holy Mother, not only for himself, but for all the brethren of the monastery. Then he lay down upon his bed and died with prayer on his lips, on September 10, 1457.
He was buried in the Church of the Dormition of the Theotokos. Soon after miracles began at his grave. Many especially who were sick with fever received healing there. The local celebration of Saint Joasaph was established shortly after his death.