Holy Prince Oleg of Briansk, who was Tonsured with the name Basil (+ 1285)

Holy Prince Leontius Oleg Romanovich of Briansk was grandson of the holy martyr Prince Michael of Chernigov. According to the chronicle histories, Prince Oleg together and his father, Prince Roman Mikhailovich of Briansk, participated in a war against Lithuania in 1274. 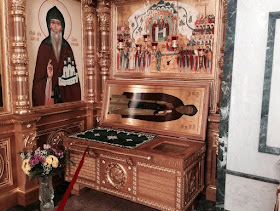 After 1274, he resigned as prince and became a monk with the name Basil at the Briansk Monastery of Saints Peter and Paul, built through his generosity. The holy prince died at this monastery as a strict ascetic in the year 1285, and was buried in the monastery church.