Saint Anthimos was born in Georgia, and his parents were called John and Maria. The child received the name Andrew in Baptism, and his parents raised him in piety as an Orthodox Christian.
Andrew was captured by Turks who invaded Georgia when he was young, and he was one of many who were made slaves in Constantinople. There he learned to speak Greek, Arabic, and Turkish, and also became skilled in woodcarving, embroidery, and painting. After a few years as a slave, Andrew escaped and fled to the Ecumenical Patriarchate for refuge. 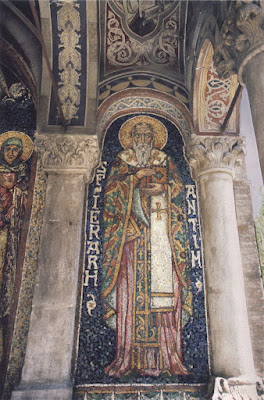 Around 1690, Andrew was invited to Wallachia by Prince Constantine Brancoveanu (Aug. 16), who had heard of his talents. After a year or so, he became a monk and received the name Anthimos. Later, he was ordained to the holy priesthood. He was placed in charge of the royal print shop in Bucharest, and later set up a printing house in the Snagov Monastery. The monastery printed sixty-three books, many of which were liturgical, in Romanian, Greek, Arabic, and Georgian. Saint Anthimos was the author of thirty-eight of them. He was chosen to be the abbot of Snagov Monastery in 1696.
The Saint was consecrated as Bishop of Rimnicu-Vilcea in 1705, and three years later he was made Metropolitan of Wallachia. As Metropolitan, he established free schools for poor children, and built churches and monasteries. Since he was a woodcarver, he used his talent to beautify many churches. 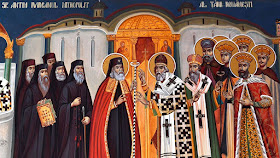 Saint Anthimos was a zealous pastor who satisfied his flock’s hunger for spiritual knowledge. Preaching in the Romanian language, he taught them the saving truths of Orthodoxy, and offered words of encouragement and consolation. His edifying books and sermons are part of the spiritual legacy of the Romanian Orthodox Church. The most important work by Metropolitan Anthimos is the Didahiile (Collection of Sermons). The book consists of twenty-eight sermons delivered throughout his pastoral service, on the occasion of the Great (Royal) Feasts as well as various feasts of the Mother of God and of the Saints, including seven occasional speeches. 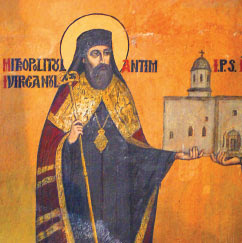 Metropolitan Anthimos was deposed, blinded and arrested by the Turks in 1716, having been accused of being involved in a plot to give the Austrian Empire control of Wallachia, and sentenced to be exiled to Saint Catherine’s Monastery on Mount Sinai, but he never arrived at his destination. On September 27, 1716 he was killed by the soldiers who were escorting him. They then cut his body into little pieces and threw them into the Tungia River, south of the Danube. Thus, the faithful servant of Christ received the crown of martyrdom. 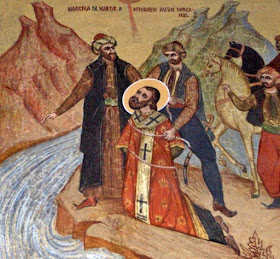 Saint Anthimos was a true shepherd of his flock, and a father to his clergy. It was thanks to his publications and encouragement that Romanian became the liturgical language of the Romanian Church. Only in 1966, the Ecumenical Patriarchate annulled the defrocking unjustly issued against Saint Anthimos and, on 21 June 1992, the Holy Synod of the Romanian Orthodox Church decided to include Metropolitan Anthimos of Iberia in the calendar, as a Holy Hierarch and Martyr, celebrated on 14 September. In Georgia he is commemorated on June 13th. 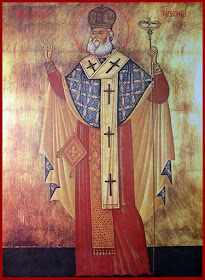 Apolytikion in the Third Tone
Holy Hierarch and Father Anthimos, you were rightly appointed a shepherd and teacher of your flock and with divine wisdom, you have poured out the rivers of your holy words. You did offer your life for your flock and have acquired the crown of martyrdom from Christ our God, to Whom you pray, O Holy Hieromartyr Anthimos, to grant peace and great mercy to those who celebrate your holy memory.