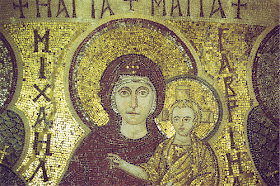 Verses
The tent is sanctified now at the consecration,
Of her who consecrated our mortal nature.
The relationship between Roman rulers and Saint Anna, the mother of the Most Holy Theotokos, began in the sixth century when Emperor Justinian I (527-565) built a church in her honor in the Deuteron district of Constantinople. The historian Prokopios provides no description of the Church of Saint Anna in the Deuteron, but the tenth century writer/editor of the Patria of Constantinople tells us that it was a three-aisle church of great size (τρίκλινος, παμμεγεθέστατος). According to the Synaxarion of Constantinople, on September 6th we commemorate the Consecration of the Most Holy Theotokos at the Deuteron in the House of Saint Anna (the text actually says it was in Hagia Eirene, but other sources indicate it was indeed that of Saint Anna). This was probably a chapel in the church.