Synaxarion of Saint Euthymios the Confessor, Bishop of Sardis

On this day we commemorate our Holy Father Euthymios the Bishop of Sardis and Confessor, or we should rather say, the Hieromartyr.
Verses
You stand before Christ, thrice-blessed Euthymios,
You have attained the fullness of unceasing cheerfulness.
This Saint lived during the reign of Constantine and Irene (780-797). At first he shined as a star in his solitary conduct. Later when he became a Bishop, he refuted by his authority the heretical Iconomachs at the Second Synod of Nicaea, namely the Seventh Ecumenical Synod (787). Seeing that he held his ground, the emperors sent him as an ambassador to various embassies. Because Nikephoros Staurakios took imperial authority in 802, and he lived his life lawlessly, the Saint rebuked him. Therefore he was exiled to Pantelleria in the West, together with other Orthodox Bishops. From then till the time of his confession, it was a period of twenty-nine years, during which the thrice-blessed one was unable to receive his Metropolis and sit in his see. When the emperors who held power were removed from within, and the beastly-named Leo became emperor, namely the Armenian, in 813, the Saint was brought back from exile, and he was questioned by him if he venerated the holy icons. Because the Saint applied his habitual boldness, and anathematized the emperor while standing before him, the tyrant became enraged, and exiled the Saint to Assos, which is also called Apollonia, and is located near Adramyttion. 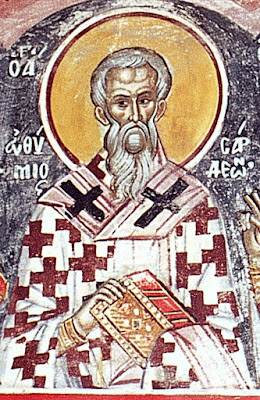 After the wicked Leo was murdered by a knife, the renowned Euthymios was recalled from exile by the succeeding emperor, namely Michael the Stammerer, in 820. By him he was urged to not venerate the holy icons. The Saint struck down the tyrant with his words, as if they were thunder, and with a loud voice cried out: "Those who do not venerate our Lord Jesus Christ circumscribed in an icon, let them be anathema." For this the Saint was flogged and exiled again to Akritas, which is at the edge of the Black Sea, and is known also as Kavo Akritas. There he was shut in a dark prison. Later the four parts of his bodily members were bound, and he was flogged for a long time with raw cow hides. From his many unbearable wounds, the Saint swelled like a wineskin, and lived only another eight days. Thus steadfast in his bravery, he delivered his holy soul into the hands of God, shining at his death in a strange manner more than the sun.*
Notes:
* His relics were held in great honor in Constantinople until its fall to the Ottomans in 1453. They were taken to Cherson in the Crimea, and conveyed secretly by certain merchants whose ship miraculously ran aground in Hele on the Black Sea of Asia Minor. The relics were transferred to the sanctuary of a church, where they emitted a beautiful fragrance and performed all sorts of miracles. In 1922, when the Greek population of Asia Minor was driven out, the natives of Hele took the skull of the Saint with them. When the refugees arrived in Piraeus, they built a magnificent church dedicated to Saint Euthymios to enshrine his skull, and it is the only church dedicated to this Saint. There the Saint is also commemorated since 1964 on the Sunday of the Holy Fathers of the Seventh Ecumenical Synod, which falls between October 11 and 17. Father Gerasimos Mikragiannanites composed a Divine Office in his honor. 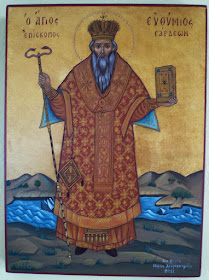 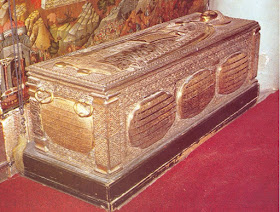 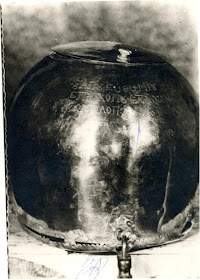 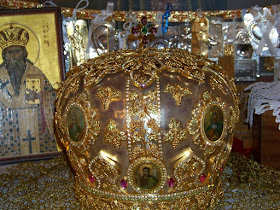