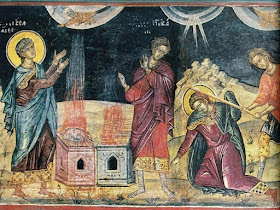 Verses
Your blood and soul apart cry out to God,
O first of the dead, and first of the saved.
According to Genesis 4:1-12:
'Adam knew his wife Eve, and she became pregnant and gave birth to Cain. She said, “With the help of the Lord I have brought forth a man.” Later she gave birth to his brother Abel. Now Abel kept flocks, and Cain worked the soil. In the course of time Cain brought some of the fruits of the soil as an offering to the Lord. And Abel also brought an offering — fat portions from some of the firstborn of his flock. The Lord looked with favor on Abel and his offering, but on Cain and his offering he did not look with favor. So Cain was very angry, and his face was downcast. Then the Lord said to Cain, “Why are you angry? Why is your face downcast? If you do what is right, will you not be accepted? But if you do not do what is right, sin is crouching at your door; it desires to have you, but you must rule over it.”
Now Cain said to his brother Abel, “Let’s go out to the field.” While they were in the field, Cain attacked his brother Abel and killed him. Then the Lord said to Cain, “Where is your brother Abel?” “I don’t know,” he replied. “Am I my brother’s keeper?” The Lord said, “What have you done? Listen! Your brother’s blood cries out to me from the ground. Now you are under a curse and driven from the ground, which opened its mouth to receive your brother’s blood from your hand. When you work the ground, it will no longer yield its crops for you. You will be a restless wanderer on the earth.”'
1 John 4:11-12 says:
'For this is the message which you have heard from the beginning, that we should love one another, unlike Cain, who was of the wicked one and killed his brother. Why did he kill him? Because his own works were evil and his brother's righteous.' 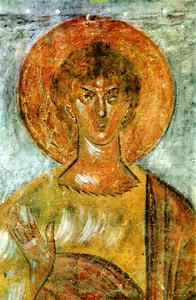 Saint Irenaeus of Lyons wrote:
'At the beginning God had respect to the gifts of Abel because he offered with single-mindedness and righteousness, but he had no respect for Cain's offering because his heart was divided with envy and malice, which he cherished against his brother. As God says when reproving his hidden thoughts, "Though you offer rightly, yet, if you do not divide rightly, have you not sinned? Be at rest' (Gen. 4:7, LXX); since God is not appeased by sacrifice.'
Comparisons are sometimes made between the death of Abel and that of Jesus, the former thus seen as being the first martyr. In Matthew 23:35 Jesus speaks of Abel as "righteous", and the Epistle to the Hebrews states that "The blood of sprinkling ... [speaks] better things than that of Abel" (Hebrews 12:24). The blood of Jesus is interpreted as bringing mercy; but that of Abel as demanding vengeance (hence the curse and mark).
Righteous Abel, the second son of Adam and Eve and first martyr, is commemorated in the Orthodox Church on the Sunday before the Nativity of the Lord. 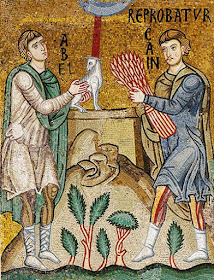 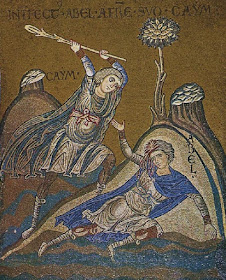 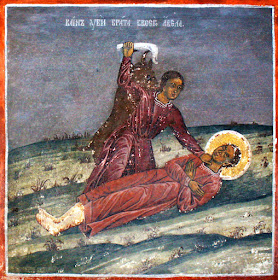