Verses
To Paramonos.
Paramonos was pierced for you my Christ,
Knowing only you as God, he dies only for you.
To the Three Hundred and Seventy.
The ten times seven men offered their heads to the sword,
Together with the six-fold fifty.
On the twenty-ninth Paramonos was slain with a long spear.
These Saints contested during the reign of Emperor Decius, when Akylinus was prefect of the East, in the year 250. The reason for their martyrdom is the following. In Basra near the Tigris River, there was a large sacred thermal spring which healed the sick. The prefect Akylinus went to this thermal spring, to be healed of a certain physical sickness of his. He had ordered to follow him there from Nicomedia as many Christians as were there that were bound for their faith in Christ. Going to the temple of the goddess Isis, and having offered corrupt sacrifices, he ordered for the Martyrs of Christ to also venerate and sacrifice to the idols. Because they were not persuaded to do so, he ordered for them all to be put to death. In this way the brave ones received the crown of the contest from Christ the King of All, being three hundred and seventy in number.
Seeing them mercilessly put to death, Saint Paramonos cried out with a loud voice saying: "I behold the greatest impiety, for so many righteous, even foreigners, the corrupt prefect has utterly slaughtered as if they were irrational animals." When the prefect heard this, he was inflamed with rage, and immediately ordered that he be put to death, not knowing who the Martyr was. Therefore those who were sent immediately captured him, though he walked about without fear, and some struck him with spears, while others pierced his tongue and other bodily members with sharp reeds. Thus he was put to death before the prefect, and in this way was sent off to the heavenly mansions, in order to rejoice for eternity with the other three hundred and seventy. The relic of this Saint was buried together with the relics of the above-mentioned Saints. 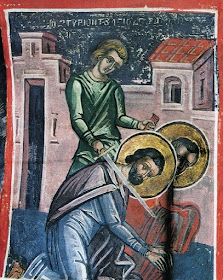 Apolytikion in the Fourth Tone
Let us acclaim Paramonos and Philoumenos as divine servants, and illustrious athletes of Christ our God, for out of love for Him, they defeated the lawless by their contest and they pray for us, that forgiveness may be granted to all.
Kontakion in the Second Tone
As martyrs enlisted by Christ through faith, you cut down the ranks of the enemy. And when you received the crown of victory, you became equal in honour to the Angels, O blessed Paramonos and wise Philoumenos.
John at 11:32:00 AM
Share
‹
›
Home
View web version