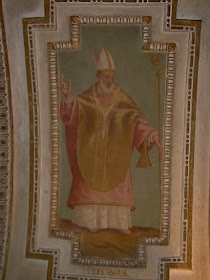 Almost nothing is known about the life of our Holy Father Protasius. He was elected Bishop of Milan in 328, and served until his death, about 343.
Saint Athanasius of Alexandria, in his Apologia ad Constantium (par. 3), mentioned that Protasius was with him when he spoke to the Roman Emperor Constantius II in order to convene a Synod against the Arians; this episode can be dated about 342 or 343. In 343, Protasius attended the Synod of Sardica and signed its decrees, standing up against the Arians and supporting the faith of the First Synod of Nicaea which took place in 325.

Protasius died about 343 on 24 November. His body was buried in Milan in the Church of San Vittore al Corpo (Saint Victor Maurus), where it is venerated still. A late tradition, with no historical basis, associates Protasius with a Milanese family, the Algisi.
John at 10:40:00 AM
Share
‹
›
Home
View web version