Saint Brice of Tours (Brictius; Bricius) was an orphan rescued by Saint Martin of Tours, and raised by Martin‘s clerics in the monastery at Marmoutiers. Though ostensibly a spiritual student of Saint Martin, Brice became so wild, wicked, proud, ungrateful, and disorderly that some thought him possessed by a demon! He became a priest, but was a vain, ambitious one with contempt for Martin. Many advised Martin to kick him out, but Saint Martin said that if Jesus could deal with Judas, he could deal with Brice.
On Martin‘s death in 397, Brice was designated to succeed him as Bishop of Tours in France. However, the people of the diocese revolted, substituted a priest named Justinian, and Brice left town to avoid a stoning.
Justinan held the see for over thirty years, during which Brice came to his senses, and began to lead a pious and admirable life. Formal ecclesiastical investigations cleared him of wrong doing, and he had the support of Pope Zosimus. When Justinian died c.430, Brice returned to Tours to claim his seat. The locals, however, remembered him and his past, and ran him out of town again, taking a priest names Armentius as bishop.
When Armentius died in 437, Brice returned to Tours again to claim his proper place, this time preceded by the news of having led a better life during his forty years of exile. He was allowed to stay, governed his diocese until his death, and his conversion had been so true and obvious that even his parishioners immediately proclaimed him a saint.
The killing of the Danes in England on 13 November 1002 is called the St Brice's Day Massacre. In the town of Stamford in Lincolnshire, 13 November, St Brice's Day, was traditionally the day that a bull-running took place. 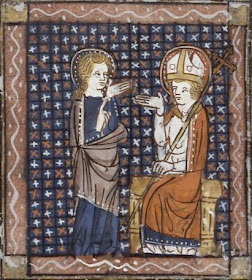 By St. Gregory of Tours
(History of the Franks, Bk. 2, Ch. 1)
After the death of the blessed Martin, Bishop of Tours, a very great and incomparable man, whose miracles fill great volumes in our possession, Brice succeeded to the bishopric. Now this Brice, when he was a young man and the Saint was yet living in the body, used to lay many traps for him, because he was often accused by Saint Martin of following the easy way.
And one day when a sick man was looking for the blessed Martin in order to get medicine from him he met Brice, at this time a deacon, in the square, and he said to him in a simple fashion: "Behold I am seeking the blessed man, and I don't know where he is or what he is doing." And Brice said: "If you are seeking for that crazy person look in the distance; there he is, staring at the sky in his usual fashion, as if he were daft." And when the poor man had seen him and got what he wanted, the blessed Martin said to the deacon: "Well, Brice, I seem to you crazy, do I?" And when the latter, in confusion at this, denied he had said so, the Saint replied: "Were not my ears at your lips when you said this at a distance? Verily I say unto you that I have prevailed upon God that you shall succeed to the bishop's office after me, but let me tell you that you will suffer many misfortunes in your tenure of the office." Brice on hearing this laughed and said: "Did I not speak the truth that he uttered crazy words?"
Furthermore, when he had attained to the rank of priest, he often attacked the blessed man with abuse. But when he had become bishop by the choice of the citizens, he devoted himself to prayer. And although he was proud and vain he was nevertheless considered chaste in his body. But in the thirty-third year after his ordination there arose against him a lamentable ground for accusation. For a woman to whom his servants used to give his garments to be washed, one who had changed her garb on the pretext of religion, conceived and bore a child. Because of this the whole population of Tours arose in wrath and laid the whole blame on the bishop, wishing with one accord to stone him. For they said: "The piety of a holy man has too long been a cover for your wantonness. But God does not any longer allow us to be polluted by kissing your unworthy hands." But he denied the charge forcibly. "Bring the infant to me," said he. And when the infant, which was thirty days old was brought, the bishop said to it: "I adjure you in the name of Jesus Christ, son of omnipotent God, to declare publicly to all if I begot you." And the child said: "It is not you who's my father." When the people asked him to inquire who was the father, the bishop said: "That is not my affair. I was troubled in so far as the matter concerned me; inquire for yourselves whatever you want." 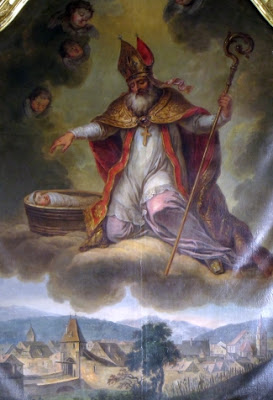 Then they asserted that this had been done by magic arts, and arose against him in a conspiracy, and dragged him along, saying: "You shall not rule us any longer under the false name of a shepherd." And to satisfy the people he placed red-hot coals in his cloak and drawing it close to him he walked as far as the tomb of the blessed Martin along with a throng of people. And when the coals were cast down before the tomb his robe was seen to be unburned. And he said: "Just as you see this robe uninjured by the fire, so too my body is undefiled by union with a woman." And when they did not believe but denied it, he was dragged, abused, and cast out, in order that the words of the Saint might be fulfilled: "Let me tell you that you will suffer many misfortunes in your episcopate." When he was cast out they appointed Justinian to the office of bishop. Finally Brice went to see the Pope of the city of Rome, weeping and wailing and saying: "Rightly do I suffer this because I sinned against a saint of God and often called him crazy and daft; and when I saw his miracles I did not believe."
And after his departure the people of Tours said to their bishop: "Go after him and attend to your own interest, for if you do not attack him, you shall be humiliated by the contempt of us all." And Justinian went forth from Tours and came to Vercelli, a city of Italy, and was smitten by a judgment of God and died in a strange country. The people of Tours heard of his death, and persisting in their evil course, they appointed Armentius in his place. But Bishop Brice went to Rome and related to the Pope all that he had endured. And while he remained at the apostolic see he often celebrated the solemn ceremony of the liturgy, weeping for the wrong he had done to the Saint of God.
In the seventh year he left Rome and by the authority of that Pope purposed to return to Tours. And when he came to the village called Mont-Louis at the sixth milestone from the city, he resided there. Now Armentius was seized with a fever and died at midnight. This was at once revealed to Bishop Brice in a vision, and he said to his people: "Rise quickly, so that we may go to bury our brother, the Bishop of Tours." And when they came and entered one gate of the city, behold they were carrying his dead body out by another. And when he was buried, Brice returned to the bishop's chair and lived happily seven years after. And when he died in the forty-seventh year of his episcopate, Saint Eustochius, a man of magnificent holiness, succeeded him.