Verses
Paul who was strangled at the throat became a boast,
Releasing those who choke and are drowning from the currents.
Wherefore on the sixth Paul confesses God and is strangled.
Saint Paul was from Thessaloniki. He became the secretary of Alexander, Patriarch of Constantinople (Aug. 30), ordained a deacon and presbyter, and then became the successor of Saint Alexander in about 337 as Patriarch. When Patriarch Alexander lay on his deathbed, the sorrowing faithful asked him who he would have follow him as the chief shepherd of the spiritual flock of Christ. He said: "If you desire a shepherd who will teach you and who will shine with virtues, choose Paul; but if you only want a suitable man, externally adorned, choose Macedonius." The people chose Paul.
Because of his virtue, his eloquence in teaching, and his zeal for Orthodoxy, the Arians hated and feared him. When the Arian Emperor Constantius, who was in Antioch, learned of Paul's election, he exiled Paul and proclaimed the Arian Eusebius of Nicomedia as Patriarch.

Saint Paul went to Rome, where he found Saint Athanasius the Great also in exile. Provided with letters by Pope Julius, Paul returned to Constantinople, and after the death of Eusebius in 342, ascended again his rightful throne; the Arians meanwhile elected Macedonius, because he rejected the Son's con-substantiality with the Father (and the divinity of the Holy Spirit besides). When Constantius, yet at Antioch, learned of Paul's return, he sent troops to Constantinople to drive Paul out.
Hermogenes, Constantius' general of cavalry, saw to it that Paul was again expelled. The people would not hear of violence being done to their bishop; they rushed upon the house where the general was, set fire to it, killed him on the spot, tied a rope round his feet, pulled him out from the burning building, and dragged him in triumph round the city. Constantius was not likely to pass over this rebellion against his authority. He rode on horseback at full speed to Constantinople, determined to make the people suffer heavily for their revolt. They met him, however, on their knees with tears and entreaties, and he contented himself with depriving them of half their allowance of corn, but ordered Paul to be driven from the city. 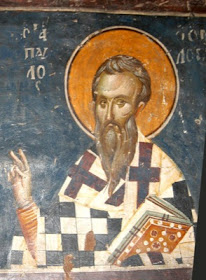 The Saint returned to Rome, where Saint Athanasius also was again in exile. Constans, Emperor of the West, Constantius' brother, but Orthodox, wrote to Constantius that if Athanasius and Paul were not allowed to return to their sees, he would come with troops to restore them himself. So Paul again returned to his throne. After the death of Constans, however, Constantius had Paul deposed. Because of the love of the people for Saint Paul, Philip the Prefect, who was sent for him, was compelled to arrest him secretly to avoid a sedition.
At a public bath called Zeuxippus, adjoining a palace by the shore of the Bosphorus, Philip asked Patriarch Paul to meet him, as if to discuss some public business. When Paul arrived, he showed him the emperor's letter, and ordered him to be quietly taken through the palace to the waterside, placed on board ship, and carried off to Thessaloniki, his native town. Philip allowed him to visit Illyricum and the remote provinces, but forbade him to set foot again in the East. 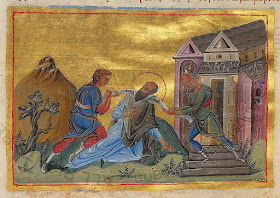 Paul was later loaded with chains and taken to Singara in Mesopotamia, then to Emesa, and finally to Cucusus in Cappadocia. Here he was confined in a narrow, dark place, and left to starve to death. After he had passed six days without food, he was, to the great disappointment of his enemies, found alive. In Cucusus, about the year 350, as Saint Paul was celebrating the Divine Liturgy in the little house where he was a prisoner, the Arians strangled him with his own omophorion, so much did they fear him even in exile. It was reported by his enemies however that he died of a sickness.
Saint Athanasius the Great, a contemporary of Saint Paul, writes briefly about Saint Paul's exiles, “Saint Paul the first time was sent by Constantine to Pontus, the second time he was fettered with chains by Constantius, and then he was locked up in Mesopotamian Syngara and from there moved to Emesus, and the fourth time to Cappadocian Cucusus in the Taurian wilderness.” 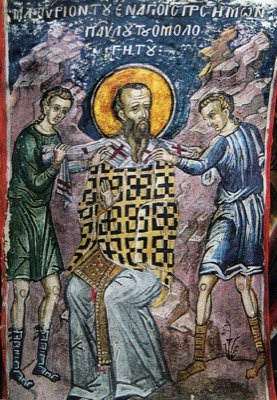 His holy relics were brought back to Constantinople with honor by the Emperor Theodosius the Great in 381. At first they were kept in the Church of Holy Peace, where he had been ordained Patriarch, then were put in a church dedicated to his name. In the year 1236 they were translated to the Church of San Lorenzo in Venice, where they still repose. His beloved priests and notaries, Markianos and Martyrios (Oct. 25), suffered soon after their patriarch. 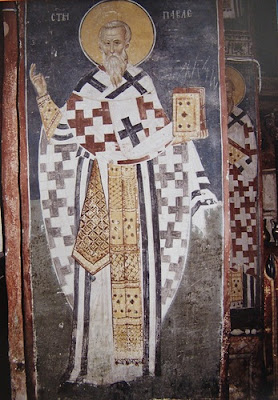 Apolytikion in the Third Tone
Thy confession of the one divine Faith showed thee to the Church to be a new Paul and a zealot among priests, O holy one. The righteous blood both of Abel and Zechariah with thee doth cry out together unto the Lord. Venerable Father, intercede with Christ God in our behalf that His great mercy may be granted unto us.
Kontakion in the Second Tone
Thou shonest on earth, a star bright with celestial light, and now thou dost shine enlightenment on all the Church, in behalf of which thou didst struggle, laying down thine own life, O Paul, and like Abel and Zechariah, thy blood doth cry out most clearly to the Lord.
John at 12:59:00 PM
Share
‹
›
Home
View web version