Gospel Commentary for the Eighth Sunday of Luke (St. Theophylact of Ochrid) 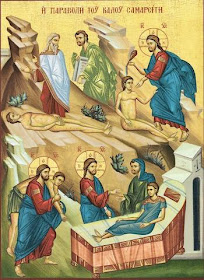 The Parable of the Good Samaritan

Luke 10:25-37
From The Explanation of the Gospel of St. Luke
By Blessed Theophylact, Archbishop of Ochrid and Bulgaria
25-28. And, behold, a certain lawyer stood up, and tempted Him, saying, "Master, what shall I do to inherit eternal life?" He said unto him, "What is written in the law? How readest thou?" And he answering said, "Thou shalt love the Lord thy God with all thy heart, and with all thy soul, and with all thy strength, and with all thy mind; and thy neighbour as thyself." And He said unto him, "Thou hast answered right: this do, and thou shalt live."
This lawyer was not only arrogant and proud but also deceitful, as is shown by what follows. He comes to put the Lord to the test, and he imagined that he would trip the Lord by the answer which He gave. But the Lord leads him to the very law of which the lawyer boasted such great knowledge. See how precisely the law commands us to love God. Man is more perfect than all other created things, being in some respect like all created things, but in addition having something exceptional. For example, there is a part of man that is like stone, for he has hair and nails which are unfeeling, like a stone. And he is also in part like a plant, in that he grows and is nourished and engenders his own kind, just as plants do. He is in part like the irrational animals, in that he has emotions, and becomes angry, and desires. But unlike all other animals, he is also in part like God, in that he has a mind. Therefore the law teaches that man must give each and every part of himself entirely to God, and must expend all the forces of his life in loving God. When the law says, "with all thy heart," it speaks of that force of human life that is purely physical and organic, a force likewise present in plant life. When the law says, "with all thy soul," it speaks of that force of human life which feels, a force likewise present in animals. When the law says, "with all thy mind," it speaks of that power which is unique to man, the intellect. "With all thy strength" means that we must use all these powers to pull [our stubborn selves to God]. We must harness even the organic, plant-like force of our soul to the love of Christ. How? With strength, and not faintheartedly. We must also subject, with strength, the power of all our senses to the love of Christ. As for the power of our rational soul, this too we must subject with all our strength to the love of Christ. So then, we must give all of ourselves to God, and we must subject our biological powers, our sensory powers, and our intellectual powers to the love of God. "And thy neighbour as thyself." The law was not yet able to teach perfection on account of the spiritual immaturity of its listeners. Therefore the law urged a man only to love his neighbor as himself. But Christ taught man to love ones neighbor more than oneself. For He says, "Greater love hath no man than this, thata man lay down his life for his friends." [Jn. 15:13] Therefore He says to the lawyer, "Thou hast answered right." Since you are still subject to the law, you have answered correctly, for your thoughts are in accordance with the old law. 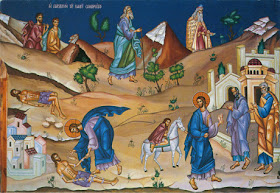