Four Things to Consider About the Apostle Matthew 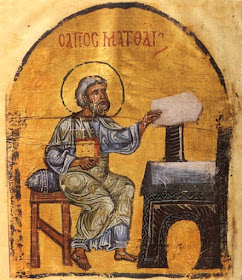 By Jacobus de Voragine
We may note that in Saint Matthew four things are worthy of consideration.
The first is his swiftness to obey; for as soon as Christ called him, he quit his custom-house, leaving his tax accounts incomplete without fear of his masters, and devoted himself completely to Christ. This ready obedience has been a source of error to some, as Jerome recounts in his commentary on that place of the Gospel: "Porphyry and the Emperor Julian find proof therein either of the ignorance of a lying chronicler, or of the witlessness of them that so promptly followed the Saviour, as if they went off after the first man who called them, without any reason whatsoever. But there is no doubt that the apostles, before they believed in Him, had seen the many signs of His power which went before Him. And of a surety, the very splendour and majesty of His hidden Godhead, which shone even in His human countenance, were enough to draw them the first time they looked upon him. For if a magnet has power to attract rings and bits of iron, how much the more can the Lord of all creation draw to Himself those whom He will!" Thus Jerome.
The second virtue is his bounty or generosity, whereby he made Him a great feast in his house. The feast was great, not so much because of the sumptuous arrangements, as for the following reasons: first, Matthew's will and intention, for he received the Lord with great love and desire; second, the mystery involved, which is explained in the gloss on Saint Luke: "He who receives Christ into his inward abode, is filled with the sweetness of abounding delights;" third, Christ's teachings on that occasion, such as: "I will have mercy and not sacrifice," and "they that are whole need not the physician, but they that are sick;" fourth, the guests who were invited namely Christ and His disciples.
The third virtue is his humility, which is manifested in a twofold way. Firstly, Matthew himself avows that he was a publican. The other evangelists, as the gloss says, did not put down the common name, because of the reverence and honor due to an evangelist; but he himself, since the just man is the first to accuse himself, calls himself Matthew and a publican, in order to show that no one who is converted should mistrust his salvation, when a publican could suddenly become an apostle and an evangelist. Secondly, he bore injuries patiently. For when the Pharisees murmured because Christ went down to a sinful man, he could rightly have answered them: "You rather are miserable and sinful men, who, deeming yourselves just, flee the physician; whereas I can no longer be called a sinner, who take refuge with the physician of salvation, and hide not my wounds from Him!"
Lastly, we may note the great honor in which his Gospel is held in the Church, for it is read more often than the other Gospels, just as the Psalms of David and the Epistles of Saint Paul are recited more frequently than the other sacred writings. The reason for this is as follows. Saint James says that there are three kinds of sin, namely pride, lust, and avarice. Saul, who had his name from the proud King Saul, committed the sin of pride, when he persecuted the Church of God beyond measure. David committed the sin of lust, when he not only fell into adultery, but on account of his adultery took the life of his most faithful soldier Uriah. Matthew committed the sin of avarice, by his panting greed for filthy lucre; for he was a keeper of the customs. The custom-house, or teloneum, as Isidore says, is a place at a seaport, where ships and seamen pay tolls on their goods; which tolls, according to Bede, are called telos in Greek, and vectigal in Latin. These three men, therefore, were sinners. Yet their repentance was so pleasing to the Lord that not only did He forgive them, but also heaped His gifts upon them in greater abundance. Of the most cruel persecutor He made a faithful preacher, of the adulterer and murderer He made a prophet and a psalmist, of the miser and money-seeker He made an apostle and an evangelist. Therefore the words of these three are read to us more frequently, so that none that wishes to be converted may despair of pardon, when grace wrought such wonders in such great sinners.
From The Golden Legend of Jacobus de Voragine, trans. and adapted by Ryan, Granger and Helmut Ripperger. (Arno Press: Longmans, Green & Co) 1941. pp. 561-566.
John at 1:04:00 PM
Share
‹
›
Home
View web version