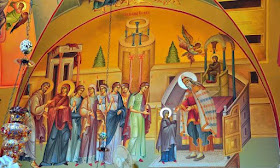 The Feast of the Entrance of the Most Holy Theotokos into the Temple has only one day of forefeast on November 20th. The hymns for today praise Saint Anna for bringing her three year old daughter, the living temple of God, to the Temple in Jerusalem.
The three Old Testament readings at Great Vespers refer to the Temple. The first lesson (Exodus 40:1-5, 9-10, 16, 34-35) refers to the arrangement of the tabernacle of the tent of the congregation (a portable sanctuary which was carried by the Israelites in their wanderings). The second lesson (III Kings/I Kings 7:51; 8:1, 3-7, 9-11) describes the dedication of Solomon’s Temple. The third lesson (Ezekiel 43:27-44:4) speaks of the gate of the sanctuary which faces east. God enters through this gate, which is shut so that no one else can enter by it.
It is believed the Feast of the Entrance of the Theotokos into the Temple began to be established during the reign of Emperor Justinian, who built a grand basilica in honor of the Mother of God in Jerusalem near the site where the Temple of Solomon once stood. This church, called the Basilical of Saint Mary the New, was consecrated on November 20th of the year 534, and since then the annual celebration of this church took place on November 21st, which perhaps became associated in the seventh century with the Entrance of the Theotokos into the Temple and became widely celebrated annually on November 21st, though the feast seems to have been first celebrated in Constantinople at this time. This is why the Epistle Reading for this feast speaks of the Temple of Jerusalem (Hebrews 9:1-7). 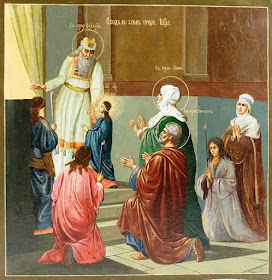 Apolytikion in the Fourth Tone
Today Anna betroths us to joy instead of grief, having blossomed forth a fruit, the only Ever-Virgin. She brings her with gladness into the temple of the Lord, in fulfillment of her vow. She is the Mother and Temple of God the Word.
Kontakion in the Fourth Tone
Today the world is filled with gladness, at the feast of the Mother of God, and cries out: She is the heavenly tabernacle.
John at 12:32:00 PM
Share
‹
›
Home
View web version