First Homily on the Entrance of the Theotokos into the Temple (St. Germanos of Constantinople) 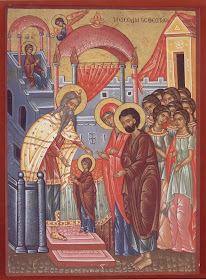