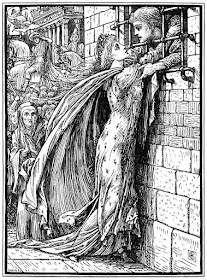 By John Moschos
(The Spiritual Meadow, 189)
When we were in the guesthouse at Ascalon, Abba Eusebius, a presbyter, told us of a ship-owning businessman who lost all his goods and that of others he was carrying at sea, though he himself escaped from the shipwreck. When he came back to Ascalon his creditors seized him, threw him into prison and took possession of everything in his house, even his wife's clothing. She was greatly distressed, and worried that in her poverty she was unable to provide any food for her husband. She was sitting in tears in the prison one day when a rather important looking man came in giving alms to the prisoners. When he saw this free woman sitting with her husband he fell in love with her, for she was very beautiful, and told her to leave the prison and come with him. She thought that he was going to give her something, so she freely did as she was told.
"What is the problem?" he asked, when he had taken her home. "Why were you in the prison?"
She told him everything.
"If I pay his debts, will you sleep with me tonight?"
"Sir, I have heard what the Apostle said," she said, with a mixture of charm and modesty, "that a woman has not authority over her own body, but the husband (1 Cor. 7:4). Let me therefore go and ask my husband, and I will do whatever he says."
So she went and told him everything. Now he was a most conscientious man, with a very deep affection for his wife, and he was not immediately carried away by the hope and desire of getting out of prison, but rather groaned and wept.
"Go back, O wife, and tell the man you refuse," he said, "for I put my trust in our Lord Jesus Christ, who will not finally abandon us."
So she went back to the man and said:
"I have asked my husband and he is not willing."
Now at this time there was also a robber in the prison who had been there since before the businessman had been arrested. He had observed everything and heard what the man and his wife had been saying to each other. "See what a sad case they are in," he said, stifling a groan. "Liberty could have been important to them. They could have accepted the money and been freed. But they valued chastity more than money. They refused the prospect of a normal life, rather than let her chastity be violated. And what shall I do, miserable wretch that I am, who have never thought about God and am a murderer to boot."
He called them over to the window of the cell in which he was confined.
"I am a robber and murderer," he said to them, "and soon the judge will be visiting here and he will order my execution for murder. I have been listening to your praiseworthy decision and been struck with compunction. So, go and dig in a certain place in this city and take the money you find there. When you have settled the debt you will find there is something left over for yourselves. And pray for me that I may find mercy."
A few days later the judge did indeed arrive in the city and ordered the robber to be led out and decapitated.
"If you like, O husband," the wife said the next day, "I will go to the place the robber said. Perhaps he was speaking the truth."
"Do what you think best," he said.
That evening she took a small spade, went to the place, and dug. There she found a pot with gold in it. She picked it up and hurried away. Before long she had prudently paid off all the debts to the creditors and to others from money he had been borrowed, giving it out a little at a time (as though she were borrowing from this one and from that one).
All debts having been met, she was able to free her husband from prison. And the man who told us this story added: "See how God multiplies his mercy upon those who keep the commandments of our Lord Jesus Christ."
John at 3:07:00 PM
Share
‹
›
Home
View web version