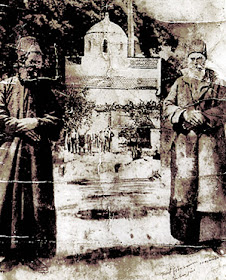 One of the most well known cases of Mitochondrial (mt) DNA analysis in the investigation of kinship from skeletal remains, is that of two brothers who are Saints in the Orthodox Church and died in Crete in the early 20th century - Parthenios and Evmenios of Koudoumas Monastery. The relics of Saint Parthenios are preserved in the monastery but those of Evmenios are not. However, during renovations a skeleton was found and it was assumed to be that of Evmenios. In order to resolve this question, in 2009 a femur of each skeleton was sent to a laboratory for mt-DNA analysis. The mt-DNA showed four base pair differences, indicating that it was not Parthenios' brother Evmenios.
If you would like to read more into this research, see:
The Application of mt-DNA Analysis to the Investigation of Kinship from Skeletal Remains
John at 5:31:00 PM
Share
‹
›
Home
View web version