Synaxarion for the Forefeast of the Procession of the Holy Cross

The commemoration of the Consecration of the revered house of our Most Holy Lady the Theotokos in Blachernae, in which the Holy Soros is kept, and the Forefeast of the Honorable Cross, namely the going forth from the imperial palace of the Honorable Cross throughout the City.
Verses
The Cross comes forth from the house of the emperor,
Inhabitants celebrate for it brings protection to those in the City.
On this day in accordance with custom there emerged from the palace of the emperor the honorable wood of the Cross and it was brought near to the Great Church. It was met by the second priest among the candlemakers (keroularioi) who held a censer and censed, and at first it was brought into the Small Baptistry, where there is a sanctification of the waters in the silver fountain, and then it is placed inside the Holy Altar of the Great Church, namely Hagia Sophia. From the Holy Altar the Cross emerges and is processed throughout all of Constantinople until the fourteenth of August. Then it returns again to the palace, where it is put in its place by the chamberlains (diaitarioi) and the great Papias.
This going forth and procession of the honorable wood of the Cross takes place because, during the coming fifteen days of August, many illnesses befall the people more than any other days of the other months. Thus the honorable Cross of the Lord is taken around the City, sanctifying the air by its presence, as well as the buildings and the alleys and the wide streets, bringing health to all those it passes, and to all those it approaches.
See also:
Feast of the Procession of the Venerable Wood of the Cross From August 1-14
The Healing Properties of the True Cross in Constantinople 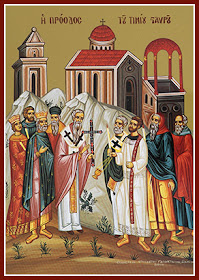 Apolytikion in the First Tone
Let us receive O faithful, the honorable Cross, the weapon of salvation, approaching it with a clean mind, being granted divine grace, and healing of soul and body, through the inexpressible energies, of Christ our God.
Another Apolytikion in the First Tone
O Lord, save Your people, and bless Your inheritance. Grant victories to the Orthodox and over their adversaries; and preserve your habitation by virtue of Your Cross.
Kontakion
As You were voluntarily raised upon the Cross for our sake, grant mercy to those who are called by Your Name, O Christ God; make all Orthodox Christians glad by Your power, granting them victories over their adversaries, by bestowing on them the invincible trophy, Your weapon of peace.