Saints Dionysios the Rhetor and Metrophanes the Spiritual Father (+ 1606)

Saint Metrophanes was the disciple and fellow ascetic of Saint Dionysios the Rhetor. Although the exact time and place of their birth remains unknown, it is likely that they were born toward the end of the fifteenth century.
For a time, Metrophanes lived with his elder Dionysios at the Studion Monastery in Constantinople, but they desired a more intensive life of prayer and solitude. Therefore, they left Constantinople and journeyed to Mount Athos, establishing themselves in a cell near Karyes. There they devoted themselves to prayer, fasting, and vigilance.
Hearing of the wisdom and virtue of Dionysios, many monks were drawn to him, and asked him to be their Elder. He agreed to this with some reluctance, but found that guiding others in the spiritual life left him little time for his own spiritual struggles. With so many people around him his soul was not at peace. Therefore, Dionysios and Metrophanes proceeded into the desert of Mount Athos in search of even greater solitude. Somewhere between the Agia Anna and Katounakia, they found a cave and made it their abode. This would be the future site of Little Saint Anna’s Skete, and they were the first to settle at this place. In that small and humble cave, they lived a godly life which was equal to that of the angels. In their spiritual struggles they fought against the stomach’s need for food, and against the body’s need for sleep. They restricted not only the types of food they ate, but also the amount they consumed at meals. By limiting the amount of time for sleep, they were able to devote themselves more to repentance and prayer. 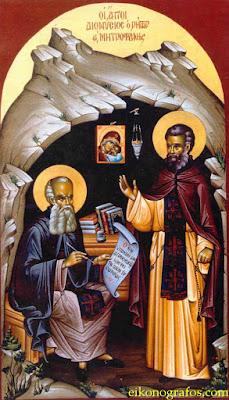 Dionysios was esteemed as a learned man, earning him the title of Rhetor by the Great Church of Constantinople. He was an especially good calligrapher and writer, and some of his writings can be found at Great Lavra, Little Saint Anna's and other monasteries. He also wrote a book called Kouvaras, which was a guide on how to benefit and train the brethren. The manuscript is preserved in the Skete’s library. Saint Dionysios taught the art of inner watchfulness and noetic prayer, and was himself proficient in them. He rendered many writings of the Holy Fathers into a simpler form of Greek so that ordinary people could understand them. Some of these have been printed in Greek theological publications in modern times. Many of his writings still remain unpublished, however.
Both Saints, though well educated, attained even greater wisdom in the true philosophy of monasticism, which has been called “a life according to the Gospel.” They made such progress in the monastic life, excelling in virtue and holiness, that they became teachers of many holy ascetics. By voluntarily humbling themselves, these Saints were exalted by God, acquiring the richest spiritual gifts and the grace of the Holy Spirit. Just as no one lights a lamp and then covers it, or puts it under a bed, “but sets it on a stand, that those who enter in may see the light” (Lk. 8:16), so the Lord did not permit the virtue of these Saints to remain hidden. The light of their holy life so shone before men that those who beheld it glorified God (Matt. 5:16). Like all-luminous lamps, the Saints shone forth on the Holy Mountain with the radiance of their holiness. 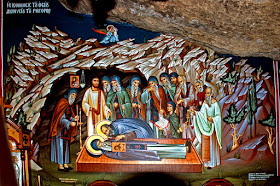 Later, Metrophanes, with the blessing of the Athonite Fathers and of his elder Dionysios, was asked to leave Mount Athos for a time in order to preach the word of God in the neighboring villages occupied by the Ottomans and allow them to go to confession, especially in the Halkidiki area. This is how he became known as the Spiritual Father. It was in Stratoniki where he became acquainted with the famous vision of a man named Demetrios concerning Heaven and Hell, which he recorded. After he had fulfilled this obedience he returned to the Holy Mountain.
According to the ever-memorable Monk Gerasimos Mikragiannanites (of Little Saint Anna’s), the twentieth century hymnographer of the Great Church of Constantinople who composed more than 2,000 services (including the service in honor of Saints Dionysios and Metrophanes), Hieromonk Dionysios fell asleep in the Lord on 6 October 1606, though some say it may have been as early as 1596, and his disciple Saint Metrophanes reposed shortly thereafter. At Little Saint Anna’s, however, both Saint Dionysios and Saint Metrophanes are commemorated on July 9th. In 1956 Monk Gerasimos, after a revelation and vision of these Saints, and with the help of his brotherhood, managed with much labor to clean out their old cell and built a chapel there in their name. Instead of a roof, it has the extension of a rock that covers the cave, and from one point water flows continuously, which the fathers collect and it is given to the pious pilgrims to be sanctified. 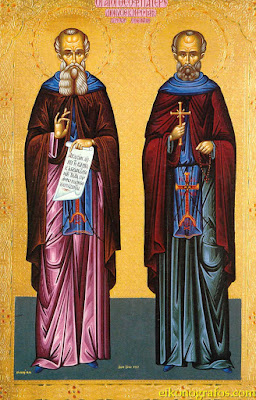 Apolytikion in the Third Tone
You consumed the roots of the passions with divine coals, and shown on Athos ascetically, for shining with the unwaning light, you were shown to be equal to the God-bearers, O wise Dionysios, and divine Metrophanes, entreat that great mercy may be granted unto us.
Kontakion in Plagal of the Fourth Tone
As the most-sacred initiates of the Trinity, and equal in standing and communicants with the Venerables, O wise Dionysios with Metrophanes, do not neglect to ever crush the machinations of the evil one against us, that we may cry, Rejoice, O God-bearers.
Megalynarion
Rejoice revered dyad of the Venerables, who walked upon the earth blamelessly in life, with Dionysios, and Metrophanes the godly, as divine healers, of the Holy Trinity. 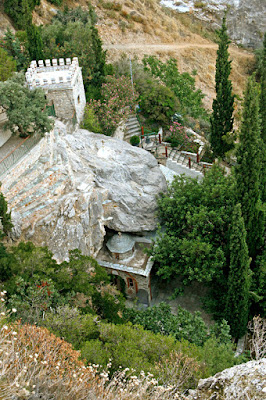 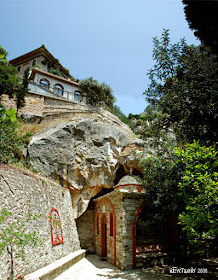 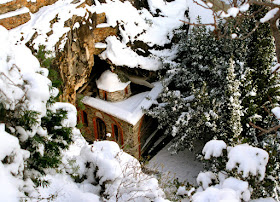 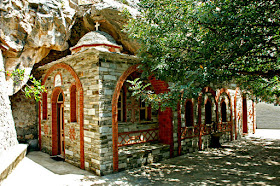 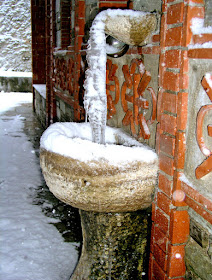 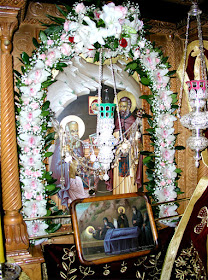