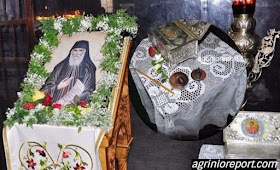 Announcement of Metropolitan Kosmas of Aitolia and Akarnania Regarding the Vigil of Saint Paisios the Athonite
On the eve of 12 July 2017, in memory of our contemporary Saint Paisios the Athonite, there took place Sacred Services and Vigils in many holy churches of our Holy Metropolis of Aitolia and Akarnania. A Sacred Vigil also took place in the adjacent area of the Holy Church of Saint Demetrios in Agrinio, at the Chapel of Saint John - the place of his martyrdom.
The Holy Metropolis of Aitolia and Akarnania, with grief and pain has monitored the turmoil and disorder among believers, which arose out of an object of blessing from Saint Paisios, in a false report of its veneration by the faithful.
With much love and understanding we listened to the protests of the faithful people, who are in confusion, and rightly worried.
Many times love and respect for our Saints, leads to extreme respect for their objects, which certainly are a particularly personal blessing, but they are by no means equal to Sacred Relics and wonderworking Icons, which are actually parts of the very bodies of our Saints or they depict their sacred faces.
We pray that you all remain faithful to the Dogmatic Teachings of our Holy Church, which even for the Sacred Icons of the Saints teaches that they are the sensible medium between the faithful and the prototype, who is unseen to them. "An icon is one thing and the one who is portrayed is another," says Saint John the Damascene.
The Holy Metropolis of Aitolia and Akarnania, with great esteem, reverence and respect for the honor of the Saints and their Sacred Relics, distributes from them, as is beneficial, every blessing that comes from them as an important means of spiritual teachings, as Basil the Great says of Icons: "What the spoken account presents through the sense of hearing, the painting silently shows by representations."
Source: Translated by John Sanidopoulos. 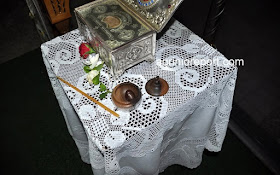 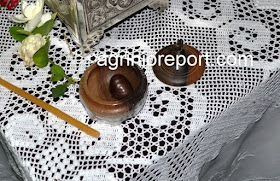