Saint Olympia the Deaconess in the 'Ecclesiastical History' of Sozomen 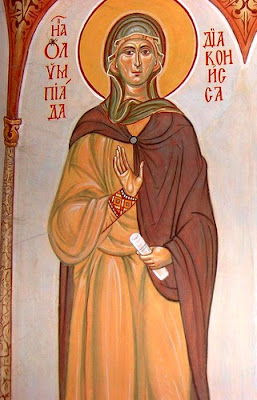 By Sozomen
Ecclesiastical History (Bk. 8, Chs. 9, 22, 23, 24, 27)
Before the Exile of John Chrysostom
The enmity of the clergy against John [Chrysostom] was greatly increased by Serapion, his archdeacon. He was an Egyptian, naturally prone to anger, and always ready to insult his opponents. The feelings of hostility were further fostered by the counsel which Olympia received from John. Olympia was of most illustrious birth, and although she had become a widow while young, and was zealously attached to the exercises of monastic philosophy according to the laws of the Church, yet Nektarios had ordained her as deaconess. John, perceiving that she bestowed her goods liberally on anyone who asked her for them, and that she despised everything but the service of God, said to her: "I applaud your intentions; but would have you know that those who aspire to the perfection of virtue according to God, ought to distribute their wealth with economy. You, however, have been bestowing wealth on the wealthy, which is as useless as if you had cast it into the sea. Know you not that you have voluntarily, for the sake of God, devoted all your possessions to the relief of the poor. You ought, therefore, to regard your wealth as belonging to your Master, and to remember that you have to account for its distribution. If you will be persuaded by me, you will in future regulate your donations according to the wants of those who solicit relief. You will thus be enabled to extend the sphere of your benevolence, and your mercy and most zealous care will receive reward from God."
After the Exile of John Chrysostom

Some of [John Chrysostom's] enemies were apprehensive lest the people, on hearing of his departure, should pursue him, and bring him back by force, and therefore commanded the gates of the church to be closed. Those who were within the church barred the exits still further by rushing together upon them, and by pressing upon one another. With difficulty they forced the doors open by the use of great violence; one party shattered them with stones, another was pulling them toward themselves, and was thus forcing the crowd backward into the building. Meanwhile the church was suddenly consumed on all sides with fire. The flames extended in all directions, and the grand house of the senatorial council, adjacent to the church on the south, was doomed. The two parties mutually accused each other of incendiarism. The enemies of John asserted that his partisans had been guilty of the deed from revenge, on account of the vote that had been passed against him by the council. These latter, on the other hand, maintained that they had been calumniated, and that the deed was perpetrated by their enemies, with the intention of burning them in the church. While the fire was spreading from late afternoon until the morning, and creeping forward to the material which was still standing, the officers who held John in custody conveyed him to Cucusus, a city of Armenia, which the emperor by letter had appointed as the place of residence for the condemned man.
Arsakios, brother of Nektarios, who had administered the bishopric before John, was, not long afterwards, ordained as bishop of Constantinople. He was of a very mild disposition, and possessed of great piety; but the reputation he had acquired as a presbyter was diminished by the conduct of some of the clergy to whom he delegated his power, and who did what they pleased in his name; for their evil deeds were imputed to him. Nothing, however, operated so much to his disadvantage as the persecution that was carried on against the followers of John. They refused to hold communion, or even to join in prayer with him, because the enemies of John were associated with him; and as they persisted, as we have before stated, in holding a church in the further parts of the city, he complained to the emperor of their conduct. The tribune was commanded to attack them with a body of soldiers, and by means of clubs and stones he soon dispersed them. The most distinguished among them in point of rank, and those who were most zealous in their adherence to John, were cast into prison. The soldiers as is usual on such occasions, went beyond their orders, and forcibly stripped the women of their ornaments, and carried off as booty their chains, their golden girdles, necklaces, and their collars of rings; they pulled off the lobes of the ear with the earrings. Although the whole city was thus filled with trouble and lamentation, the affection of the people for John still remained the same, and they refrained from appearing in public. Many of them absented themselves from the marketplace and public baths, while others, not considering themselves safe in their own houses, fled the city.


Great fortitude was evinced in the midst of these calamities by Olympia, the deaconess. Being dragged for this reason before the tribunal, and interrogated by the prefect as to her motives in setting fire to the church, she replied, "My past life ought to avert all suspicion from me, for I have devoted my large property to the restoration of the temples of God." The prefect alleged that he was well acquainted with her past course of life. "Then," continued she, "you ought to appear in the place of the accuser and let another judge us." As the accusation against her was wholly unsubstantiated by proofs, and as the prefect found that he had no ground on which he could justly blame her, he changed to a milder charge as if desirous of advising her, finding fault with her and the other women, because they refused communion with his bishop, although it was possible for them to repent and to change their own circumstances. They all through fear deferred to the advice of the prefect, but Olympia said to him, "It is not just that, after having been publicly calumniated, without having had anything proved against me in the courts, I should be obliged to clear myself of charges totally unconnected with the accusation in question. Let me rather take counsel concerning the original accusation that has been preferred against me. For even if you resort to unlawful compulsion, I will not hold communion with those from whom I ought to secede, nor consent to anything that is not lawful to the pious." The prefect, finding that he could not prevail upon her to hold communion with Arsakios, dismissed her that she might consult the advocates. On another occasion, however, he again sent for her and condemned her to pay a heavy fine, for he imagined by this means she would be compelled to change her mind. But she totally disregarded the loss of her property, and left Constantinople for Cyzicus.
John acquired great celebrity even in his exile. He possessed ample pecuniary resources, and being besides liberally supplied with money by Olympia, the deaconess, and others, he purchased the liberty of many captives from the Isaurian robbers, and restored them to their families. He also administered to the necessities of many who were in want; and by his kind words comforted those who did not stand in need of money. Hence he was exceedingly beloved not only in Armenia, where he dwelt, but by all the people of the neighboring countries, and the inhabitants of Antioch and of the other parts of Syria, and of Cilicia, who frequently sought his company.
John at 6:20:00 PM
Share
‹
›
Home
View web version