Saint Menelaos was born in Precigne of France around the year 700 and came from a very eminent aristocratic family.
From very early age it was foreboded that the Saint would follow the road that Jesus had shown. That led to many obstacles, difficulties and challenges, as his father, when the Saint reached manhood, pushed him to get the official social position as a prince and get married to a blueblood. The young man Menelaos replied without fear that he did not want to get married. And because of continuous conflict with his father, he finally decided with a broken heart to flee those worldly plans.
After intense prayer and in order to avoid getting caught he consulted two of his most intimate and trusted friends, Constas and Sabbinino, and all three together decided to leave their parental homes. Guided by Divine Providence they left the city and reached the ruined, ancient and famous Monastery of Saint Menas.
After they settled well in a quiet place, one day they received a visit from a monk named Theophritos who suggested that they should go and submit themselves under the spiritual guidance of Saint Eudos. So Menelaos joined the entourage.
After some time the three hermits obtained great fame, which reached so far that one day there arrived at the gates of the monastery his mother, sister and his former fiance. Originally the Saint believed that they came to change his mind, but, unexpectedly they asked him to follow the Christian life and become nuns.
After the above, the days and the years of Blessed Menelaos flowed in peace. A large number of novice monks came to him, desiring to follow the way of quietude and silence. The small and dilapidated monastery was restored and in its place there was a huge Lavra with the name of the Saint, as he is considered the second founder and renovator.
The Saint foresaw the end of his life. So he delivered holy advice to his brethren the fathers of the monastery and having proposed his successor, departed to meet his Lord.
Saint Menelaos, by the grace of God, performed many miracles while he was still alive as an abbot:
1. A man whose name was Robert coming from Turonius, and suffering from bad paralysis, went to a Divine Liturgy of the Saint during a vigil, the Saint crossed him, gave him communion and the man became well and walked.
2. A woman who had lost her sight, born in Carantonio where she especially venerated the Mother of God, also came as a pilgrim to a service and as soon as she met the Saint, she regained her sight.
3. A man who had been blind from birth, by name Karaldis, a nobleman from Paris, met the Saint, who made clay with holy water of the monastery and crossed him in the name of our Lord Jesus Christ and, behold, he began to see and glorify God as the blind man of the Gospel.
4. When he found before him a dead child, he viewed him with such strong love and sympathy, that with his fervent prayer to the Lord of life and death, restored him back to life.
5. Having as a model his miraculous spiritual patron Saint Benedict, he drove out the devil with just a slap. 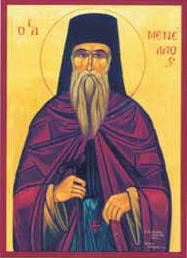 Apolytikion in the Fourth Tone
The multitude of monastics, honor you Menelaos as a teacher, by your example, we were taught the straight path. You are blessed, having served Christ, and triumphed over the power of the enemy, you who conversed with angels, and fellow of the great ascetics. Therefore intercede to the Lord, that He may have mercy on our souls.
John at 5:57:00 PM
Share
‹
›
Home
View web version