Saint Athanasios the Athonite and the Bed-Wetting Monk 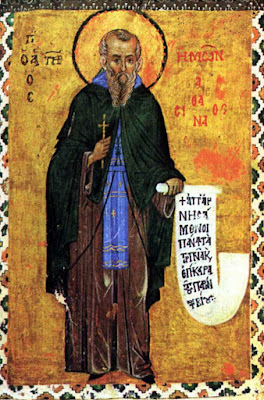 There was a monk who was a most devoted and eager ascetic and struggler, who suffered from bed-wetting. His incontinence brought him so much sorrow and affliction that the all-wicked and knavish devil suggested that the wretched one hang himself. Yet, the all-good God did not allow that ascetic to lose his labors. He motioned his heart to have confession with his elder Saint Athanasios.
During confession, the monk showed Athanasios the slip-knot of the rope wherewith he intended to strangle himself, however, he was ashamed to say what brought him to that state. Only when the Saint compelled him in confession to reveal the matter would he admit his problem. Whereupon, the Saint, vexed, uttered: "Why, O darkened one, did you not tell us earlier?" Then - O the wonder! - his word became action, because henceforth, that ascetic no longer urinated involuntarily.
John at 4:56:00 PM
Share
‹
›
Home
View web version