Mary Magdalene, Myrrhbearer and Equal to the Apostles 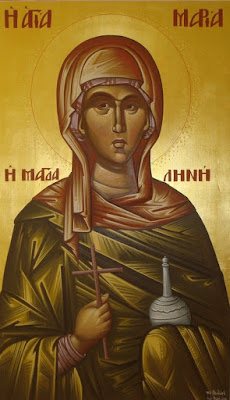 Little is known of the early life of St. Mary. She was called "Magdalene" because she lived in the town of Magdala on the shore of the sea of Galilee. In the Gospels we read that she was afflicted with an incurable disease: she was possessed by seven devils (Lk. 8:2). This was allowed by God's Providence so that in curing her the Lord Jesus Christ could show forth the power and glory of God.
Helpless in her sufferings and hearing about the miracle-working power of Christ, Mary hastened to Him and asked to be delivered from her infirmity. Through her faith in His almighty power, Christ cast the seven devils out from her. Her heart became filled with thanksgiving and pure love for her Divine Healer. From that time forth she dedicated her whole life to her Savior Jesus Christ and became one of his most devoted followers. She took every opportunity to listen to His teachings and to serve Him. Her example encouraged other women to do likewise.
Particularly remarkable was the determination and unusual courage which Mary Magdalene showed toward her Savior. At the time of His greatest suffering, while He hung on the Cross and when even His apostles had abandoned Him, Mary Magdalene stood at the foot of the Cross together with the Mother of God and the Lord's beloved disciple, John. They mourned and wept, but even in their weeping they comforted the Savior with their undying love and the knowledge that He had not been utterly forsaken. That night Mary Magdalene came with Joseph of Arimathea and Nikodemos when they took the Body of her beloved Lord down from the Cross and laid It in a tomb. Together with the other women disciples, she returned to prepare myrrh and other ointments with which to anoint the precious Body of Christ, according to the Jewish custom.
Very early in the morning on the first day of the week, while it was still dark, Mary Magdalene came to the sepulchre (tomb) carrying the ointments (For this reason the Church calls her "Myrrhbearer".) Coming close she saw that the large stone that had been placed at the entrance of the tomb had been rolled away. She thought that perhaps someone had already come and taken the Body to another place. Hurrying back to Jerusalem she told the apostles Peter and John: "They have taken away the Lord out of the sepulchre, and we know not where they have laid Him." Together with them she went again to the tomb and stood there weeping. When they had left she stooped down and looked into the sepulchre. There she saw two angels who asked why she was crying. She told them and then, turning around, she saw Jesus, but in her grief she did not recognize Him, and thinking He was the gardener, told Him also the reason for her weeping. It was only then He said her name: "Mary!" that she recognized Him as her beloved Lord. Not believing her own ears, she cried out with joy, "Master!" Then following His instructions, she ran quickly to announce the good news to the disciples: “Christ is risen!” (Because she was the first, sent by the Lord Himself, to proclaim the Resurrection, the Church also calls her "Equal to the Apostles").
Even after Christ’s Ascension into heaven, Mary Magdalene continued to preach the good news of Christ's glorious Resurrection, not only in Jerusalem, but also in other countries. She spent her last years in Ephesus helping St. John the Evangelist in missionary labors. There she died peacefully.
In the 9th century her incorrupt relics were taken to Constantinople and placed in the Church of the Holy Apostles.
St. Mary Magdalen zealously fulfilled the first and greatest commandment: "Love the Lord thy God with all thy heart, with all thy mind and with all thy strength." Her life is an example for us to love and serve God above all, not fearing what others may say or do to us. Let us too be apostles of the faith and tell everyone the good news which St. Mary Magdalene was first to proclaim as a Myrrhbearer and Equal to the Apostles: "Christ is Risen! Truly He is Risen!"
John at 1:19:00 PM
Share
‹
›
Home
View web version