Verses
Out of your virtues O Hyacinth as a stone,
You were filled with brilliance as your blood streamed.
On the third Hyacinth died of accursed hunger.
+ + +
My food is to do the will of the Lord,
Food Hyacinth declared clean.
On the third Hyacinth died of accursed hunger.
Saint Hyacinth (Yakinthos) was from Caesarea of Cappadocia, and flourished during the reign of Emperor Trajan (98-117). He was a Cubicularius, serving as a chamberlain of the imperial palace, specifically in the dining room of Emperor Trajan. Once during the time of a pagan festival the emperor Trajan was feasting in a pagan temple together with his companions, eating of the idol-offered food, but the youth Hyacinth, having remained at the palace, shut himself up in a small room and prayed fervently to the Lord Jesus Christ. One of the servants overheard the words of prayer. He made a denunciation to the emperor, that Hyacinth, entrusted with an imperial position, did not honor the Roman gods but was secretly praying to Christ.
After he was denounced for being a Christian to the emperor, he was urged by him to eat of the defiled meat offered as sacrifices to the idols. Unable to persuade him, Hyacinth instead confessed Christ, therefore his body was scourged, and he was cast into prison, putting before him meats that were sacrificed to the idols in order for him to eat.

Now eating food used as a sacrifice to the idols was forbidden in Christianity, and young Hyacinth considered the eating of such food to be a denial of his Christian faith. The emperor had ordered the prison guards to not even let him have a morsel of pure bread, so that he would be forced to eat the food sacrificed to idols. But the brave athlete of Christ did not want to even taste of them, instead he remained for forty days without food. On the thirty-eighth day, one of the guards, bringing the idol-offered meat, saw Angels alongside the Martyr, dressing him in bright attire and placing on his head a crown. Finally on the fortieth day he was overcome by his hunger, and he delivered his soul to Christ, receiving from him the crown of martyrdom.
It is said that Saint Hyacinth was twelve years old when he died of starvation in prison (though others say he was twenty), and that he died in Rome and after his body was transferred back to his native Caesarea. A body identified as his is preserved and venerated in the abbey church of the former Cistercian Abbey of Fürstenfeld, in Bavaria of Germany, of which the church is the only surviving structure. In Crete he is considered a patron saint of lovers, much like Saint Valentine in the West.
See also: Saint Hyacinth, the Saint Of Love In Crete 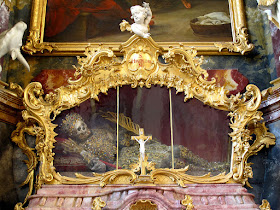 Apolytikion in the Fourth Tone
With rays of grace thou dost shine to the ends of the world, like a hyacinth in Christ's Church, O blessed Hyacinth; for thy confession of the faith was radiant; and in thy contest thou didst follow Christ the Word. Thou dost ever illumine those who honour thee.
Kontakion in the Fourth Tone
Come O you faithful, plait a crown of unfading hyacinths today, for the Martyr Hyacinth, and let us cry to him: Rejoice, O Hyacinth, glory of the martyrs.
John at 11:23:00 AM
Share
‹
›
Home
View web version