Verses
Aimilianos was thrown into the fire,
Standing before Christ, he makes merry with the Angels.
On the eighteenth Aimilianos was thrown into the flames.
+ + +
Aimilianos was thrown to the burning coals,
Seeing the burning coal as Isaiah saw it.
On the eighteenth Aimilianos was burnt in the fire.
Theodoret of Cyrus, in his Ecclesiastical History (Bk. 3, Ch. 6), records the following about Saint Aimilianos: "At Dorostolon, a famous city of Thrace, the victorious athlete Aimilianos was thrown upon a flaming pyre, by Capitolinus, governor of all Thrace."
This took place during the reign of Julian the Apostate in the year 362. In the Thracian town of Dorostolon, later known as Silistria, lived a young man, Aimilianos, a servant of a fanatical pagan, who lived a secret Christian life. When the apostate emperor began his attempt to eradicate Christianity throughout the realm of the Roman Empire by fire and sword and, when the emperor's representative came to Dorostolon to kill the Christians, he did not find a single one. Rejoicing at this, he sponsored a great banquet for the citizens of Dorostolon and ordered sacrifices to be offered to the idols and rejoicing ensued throughout the entire town, day and night. 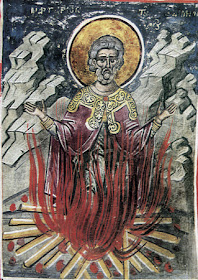 That night, Aimilianos entered the pagan temples, markets and the streets of the town and smashed all of the idols with a sledgehammer. The next day there was terror in the city. Everyone sought the destroyer of their gods. A peasant was passing by the temple that morning and was seized. Aimilianos, seeing that an innocent man would suffer, said to himself: "If I conceal my works, what benefit would I receive from that which I did? Before God, will I not be found as the murderer of this innocent man?"
Therefore, he appeared before the emperor's legate and admitted all. The enraged legate asked Aimilianos, "Who prompted you to do this?" The Martyr of Christ replied: "God and my soul ordered me to destroy those lifeless pillars which you call gods." The judge then ordered that Aimilianos be flogged and, after flogging with a raw hide and other tortures, ordered him to be burned alive. Though the fire did not consume him, the blessed one delivered his soul into the hands of God and received from Him the unfading crown of martyrdom.
The wife of the pagan ruler was also a secret Christian, and she gathered up the Saint’s relics and buried them. Afterward, a church dedicated to the Holy Martyr Aimilianos was built at Constantinople, where his relics were transferred and his feast was celebrated annually. 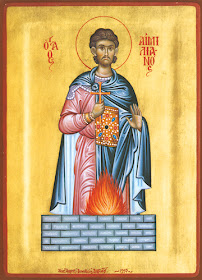 Apolytikion in the Fourth Tone
By fire thou wast a burnt offering to thy Master, and dost bring us joy by showering on us graces. Thou didst bear within thee the heavenly fire, and accept the material flame as dew. Ever preserve those who honour thee, O Martyr Aimilianos.
Kontakion in the Third Tone
Thou didst not fear thy fellow-creature fire, for thou wast ablaze with holy zeal. Thou didst willingly enter the flames and wast unconsumed by their fury, and didst offer thyself in sacrifice to the Lord. O Aimilianos, pray to Christ our God to grant us His great mercy.
John at 11:12:00 AM
Share
‹
›
Home
View web version