Holy Great Martyr Prokopios at Caesarea and Those With Him

Verses
To Prokopios.
As Prokopios bent forward his neck,
He said as he was beheaded: "I will not sacrifice to delusion."
On the eighth the head of Prokopios was swiftly cut off.
To Theodosia the Mother of Prokopios.
Theodosia was the mother of the Athlete,
Hastening as a champion to the point of the sword.
To the Twelve Women of Senatorial Rank.*
The doubly renowned maidens were taken away to the sword,
Holding fame to be as the dung of the earth.
To Antiochos and Nikostratos.
As Nikostratos was carried off to be beheaded he said,
Like Antiochos: "For my head also?"
To Abda, or Auda.**
Once she approached her sufferings she became courageous,
Abda had joy as she suffered the sword.
The Holy Great Martyr Prokopios, who was called Neanias, was a native of Jerusalem, who lived and suffered during the reign of the emperor Diocletian (284-305). His father, an eminent Roman by the name of Christopher, was a Christian, but his mother, Theodosia, remained a pagan. He was early deprived of his father, and the young child was raised by his mother. Having received an excellent secular education, he was brought to Antioch and offered to Diocletian by his mother in the very first year of the emperor’s accession to the throne, and he quickly advanced in government service. Towards the year 303, when open persecution against Christians began, Neanias was sent as a proconsul to Alexandria with orders to mercilessly execute the Christians. 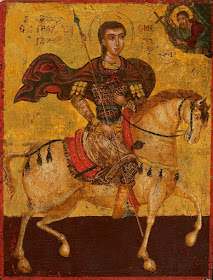 On the way to Alexandria, something happened to Neanias similar to that which happened to Saul [Paul] on the way to Damascus. In the third hour of the night there was a strong earthquake and, at that moment, the Lord appeared to him and a voice was heard: "Neanias, where are you going and against whom are you rising up?" In great fear, Neanias asked: "Who are You Lord? I am unable to recognize You." At that moment, a glowing Cross as if of crystal appeared in the sky and from the Cross there came a voice saying: "I am the crucified Jesus, the Son of God." And further, the Lord said to him: "By this sign that you saw, conquer your enemies and My peace will be with you." By this the whole economy of salvation was revealed to him. That experience completely altered his way of life and thought. He then went to Scythopolis and fashioned the same kind of Cross which he saw out of gold and silver. After he completed this three icons were revealed to Prokopios, and each icon bore a name in Hebrew: one said Emmanuel, the other Gabriel, and the other Michael. After venerating the Cross and three icons, instead of going against the Christians, Prokopios with his soldiers turned against the Agari*** who were attacking Jerusalem. He entered Jerusalem as a victor and declared to his mother that he is a Christian.
The words of the Savior came true for the Saint, “A man’s foes shall be those of his own household” (Mt. 10:36). His mother, a pagan herself, urged Prokopios to offer sacrifice to the gods who granted him the victory over his enemies, but he told her that his victory did not come from the gods, but through the power of Christ. She then went to the emperor to complain that her son no longer worshiped the ancestral gods. Neanias was summoned to the procurator Judaeus Justus, where he was solemnly handed the decree of Diocletian. Having read through the blasphemous directive, Neanias quietly tore it up before the eyes of everyone. This was a crime, which the Romans regarded as an “insult to authority.” Neanias was held under guard and in chains sent to Caesarea of Palestine, where the Apostle Paul once languished. After terrible torments, they threw the Saint into a dark prison. That night, a light shone in the prison, and the Lord Jesus Christ Himself released the Saint from his bonds, and gave him the name Prokopios; by this name he was urged to "advance" and complete his martyrdom.

Repeatedly they led Saint Prokopios to the courtroom, demanding that he renounce Christ, and they subjected him to more tortures. The steadfastness of the Martyr and his fiery faith brought down God’s abundant grace on those who witnessed the trials. At one point he was brought to a temple in order to sacrifice to the gods. Instead, by his prayers, the idols fell and were crushed on the ground, then they turned to water, which flowed outside the temple.
Inspired by the example and miracles of Prokopios, many of the holy Martyr’s former guards and Roman soldiers went beneath the executioner’s sword together with their tribunes Nikostratos and Antiochos, who had prior to their beheading went to be baptized by Bishop Leontios. Twelve women of senatorial rank also came to believe in Christ after witnessing the miracles of Prokopios, and they appeared before his prison window and said to him: "We too are the servants of Christ." Accused of this they were thrown into the same prison where Prokopios taught them the faith of Christ and particularly about how they will receive the crown of martyrdom. For this reason in the Orthodox marriage ritual of the betrothed, Saint Prokopios is mentioned along with the God-crowned Emperor Constantine and Empress Helen. Then these twelve women were cruelly tortured, first by having their breasts cut off, then they were burned under their arms with hot iron balls. 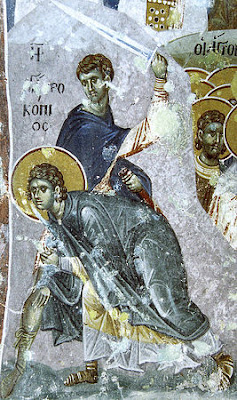 Struck by the great faith and courage of these twelve women, and seeing the firmness of her son in bearing terrible sufferings, Theodosia became repentant and stood together with the twelve women and was executed with them by the sword. Finally the new procurator, Flavian, came to rule, and he ordered his servant Archelaus to strike Prokopios in the stomach with his sword. As soon as he raised his hand to strike the Saint, Archelaus fell down dead. Then he was scourged and after this burnt with lit coals, and over his wounds was poured vinegar. Then burning coal was placed in his hand with incense, which was done to force him to offer it as a sacrifice to the gods, but Prokopios remained firm and allowed the burning coal to burn through his hand rather than offer the sacrifice. Then Prokopios was taken and placed in a burning furnace, but through the sign of the Cross he made the hot furnace cool.

Convinced of the futility of the tortures, Flavian sentenced the holy Great Martyr Prokopios to beheading by the sword. When Prokopios was led to the place of execution, he raised his hands toward the east and prayed to God for all the poor and misfortunate, orphans and widows and especially for the Holy Church that it may grow and spread and that her truth shine to the end of time. And to Prokopios there was a reply from heaven that his prayers were heard, after which he joyfully laid his head under the sword and went to his Lord in eternal joy. By night Christians took up his much-tortured body, and with tears and prayers, they committed it to the earth.****
Notes:
* Roman women of senatorial rank held great privileges, sometimes even more than certain men of rank. They were organized into a guild, called the Conventus Matronarum, which was sort of a feminine senate. At times this body was consulted by certain of the emperors on minor questions of state.
** St. Nikodemos the Hagiorite says that in a certain manuscript of the Synaxaristes, it says that Abda, or Auda, was a woman who came to faith in Christ through Prokopios.
*** The Agari were a tribe of Scythians.
**** This life of Saint Prokopios bears certain resemblance to Saint Prokopios of Palestine celebrated on November 22nd and recorded by Eusebius of Caesarea in his History of the Martyrs of Palestine as being the first of the martyrs of Palestine. Many associate the two as being the same person, with the former adding certain legends. However, there are also differences that distinguish them, with the few similarities possibly being confusions between the two. 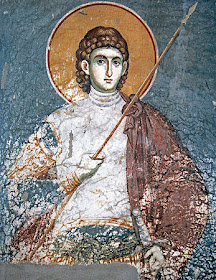 Apolytikion in Plagal of the Fifth Tone
Heaven caught thee and drew thee to piety, and like Paul thou didst gladly follow Christ, O Prokopios adornment of martyrs. Through the might of the Cross thou didst excel in contest, and put Belial to shame, from whose malice preserve those who lovingly praise thee.
Kontakion in the Second Tone
Zealous for Christ and armed with the might of the Cross, thou didst humble the proud and bold enemy. O Prokopios, thou didst exalt the Church, and dost now enlighten us in the faith.
John at 12:58:00 PM
Share
‹
›
Home
View web version