Elijah and the Mercy of God's Judgments 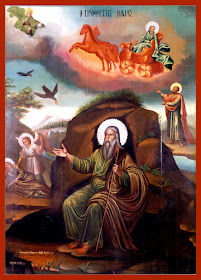 By Caesarius of Arles
Wretched men are apt to censure the writings of the Old Testament saying: "How was it just for blessed Elijah to burn two captains with their soldiers by means of fire brought down from heaven?" How justly and mercifully this was done, dearly beloved, we want to indicate briefly to your hearts.
In the days of the Old Testament, any crimes or offenses committed among the people were ordered to be physically punished. Thus it is written: "Eye for eye, tooth for tooth." Indeed, some were punished in order that the rest might fear bodily punishment and refrain from sins and offenses. Now, in the time of the prophet, all the Jewish people had abandoned God and were sacrificing to idols, not only refusing to honor God's prophets but even very frequently trying to kill them. For this reason blessed Elijah was aroused with zeal for God and caused some to be punished physically, so that those who had neglected the salvation of their souls might be healed in heart by fearing bodily death. We should consider that not so much blessed Elijah as the Holy Spirit did this.
We know that the same thing was done through blessed Peter in the case of Ananias and Saphira, for through him they incurred the destruction of death themselves in order that an example might be given to the rest. Therefore, as it is written, "Great fear seized all who heard this." Examples are given to everyone whenever punishments are inflicted on sinners. Because the Jews thought only of their body and refused to be solicitous for the salvation of their soul, with God as judge they suffered punishment in the very body to which they had devoted so much care.
Now if you consider well, dearly beloved, you will realize that not only the Jewish people fell through pride, but also those two captains perished from the same weakness. With great pride and arrogance but lacking any humility, the latter came to blessed Elijah and said: "Man of God, the king summons you." Because they did not given him honor as an old man or reverence as a prophet, the Holy Spirit spoke through the mouth of the prophet, and they were struck down by a blow sent from heaven. The third captain, however, coming with great humility and contrition, as was proper, pleaded in a tearful voice and not only merited to escape punishment but even induced blessed Elijah to condescend to go to the king. All this, dearly beloved, happened for the salvation of all the people, since the good and merciful Lord struck a few people in order that He might heal them all.
From Sermon 125.1-2.
John at 4:05:00 PM
Share
‹
›
Home
View web version