What it Means That Christ Sits at the Right Hand of the Father (St. John of Damascus) 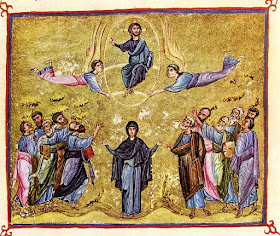 By St. John of Damascus
After Christ was risen from the dead He laid aside all His passions, I mean His corruption or hunger or thirst or sleep or weariness or such like. For, although He did taste food after the resurrection [Luke 24:43], yet He did not do so because it was a law of His nature (for He felt no hunger), but in the way of economy, in order that He might convince us of the reality of the resurrection, and that it was one and the same flesh which suffered and rose again. But He laid aside none of the divisions of His nature, neither body nor spirit, but possesses both the body and the soul intelligent and reasonable, volitional and energetic, and in this wise He sits at the right hand of the Father, using His will both as God and as man in behalf of our salvation, energizing in His divine capacity to provide for and maintain and govern all things, and remembering in His human capacity the time He spent on earth, while all the time He both sees and knows that He is adored by all rational creation. For His Holy Spirit knows that He is one in substance with God the Word, and shares as Spirit of God and not simply as Spirit the worship accorded to Him. Moreover, His ascent from earth to heaven, and again, His descent from heaven to earth, are manifestations of the energies of His circumscribed body. For He shall so come again to you, says he, in like manner as you have seen Him go into Heaven [Acts 1:11].
We hold, moreover, that Christ sits in the body at the right hand of God the Father, but we do not hold that the right hand of the Father is actual place. For how could He that is uncircumscribed have a right hand limited by place? Right hands and left hands belong to what is circumscribed. But we understand the right hand of the Father to be the glory and honor of the Godhead in which the Son of God, who existed as God before the ages, and is of like essence to the Father, and in the end became flesh, has a seat in the body, His flesh sharing in the glory. For He along with His flesh is adored with one adoration by all creation.
From An Exposition of the Orthodox Faith (Bk. 4, Ch. 1-2)
John at 11:19:00 AM
Share
‹
›
Home
View web version