Why Does Saint Phanourios Hold a Candle in his Icons? 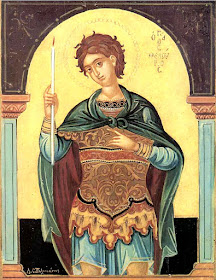 The iambic verses for the Synaxarion of Saint Phanourios say:

Phanourios bestows light upon all the faithful,
Even though he long lay in the darkness of the earth.

When the icon of Saint Phanourios was discovered in a dark cave of Rhodes centuries ago, he was brought to light from obscurity, and he was depicted in the icon holding a lit candle. The fact that an icon of a previously unknown Saint was discovered which revealed things about his life and attributes, as well as the fact that his name means "one who manifests" or more accurately "one who brings to light," tells us that Saint Phanourios is depicted holding a lit candle because he reveals lost things and illumines us with his grace.
According to various Greek folk customs, Saint Phanourios reveals lost items, lost animals, and anything else that can be lost, stolen, hidden or obscured. But in order to have these things manifested or revealed, an offering must be made in return. For example, in Delphi of Parnassida, when they lose something they say: "My Saint Phanourios, reveal to me ..., and I will make you a cake for the soul of your mother!" Then they have a dream in which that which they seek is revealed, and afterwards they find it. With this they make a cake known as Phanouropita (Cake of Phanourios) and they distribute pieces to the young children, saying: "Take, and may she be forgiven" (namely the mother of the Saint).
Saint Phanourios is also seen as the Saint who brings good fortune. He will reveal to people the right path. And if things are going well with someone, people will say of them: "Saint Phanourios is shining on them."
In Cyprus, Crete and other places in Greece like Skiathos and Florina, single women will make these cakes to find a husband. They will make a Phanouropita, take it to be blessed in the church by a priest, distribute it to the faithful, and keep a piece for themselves which they will place under their pillow when they sleep. By doing this, they hope to have a dream of who their future husband will be.
Of course, some of these things can be a bit superstitious, although plenty of miracles do attest to the fact that Saint Phanourios can indeed help pious Christians find lost items. These things also reveal that he is a Saint we can flee to in our prayers in a time of need, and if he chooses to shed his light on the matter, then he should be properly thanked. But the most important thing Saint Phanourios reveals to us, as we especially see in his icons, is the ultimate sacrifice he made for his love for Christ, which is his life, and that the source of his light is Christ Himself, who illuminates all those who love Him and keep His commandments.
John at 5:35:00 PM
Share
‹
›
Home
View web version