The Threefold Task of the Prophet Samuel 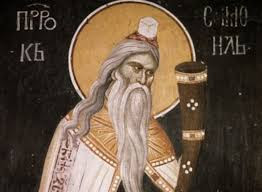 By Metropolitan Hierotheos of Nafpaktos and Agiou Vlasiou
The Prophet Samuel had been chosen by God to become Prophet and Judge of the Israelite people with a particular mission. It was a particularly difficult and troubled period. The Philistines posed a fundamental threat to the Israelites. In fact, during Samuel's lifetime the struggle against the Philistines began and the first victories were won, which were, of course, brought to completion in the reign of David. What needs to be stressed yet again is that the Prophet Samuel lived and worked in a very difficult era.
The Judges were men sent by God at difficult moments to save the people of Israel from various dangerous enemies. Their period lasted for about 400 years, from the death of Joshua until Saul was appointed king. Judges were not chosen by the people, but directly by God. Their principal task was to rule and direct the people. They had the right and power to judge, but did not have the power to make laws or impose taxes. However, they had the right to resolve the differences that arose among the people. The total number of those who were called Judges reached fifteen, and one of them was even a woman, Deborah. The last of the Judges was Samuel.
Teaching and Advising the People
The Prophet Samuel, who was completely integrated into the tradition of the Prophets, first of all preached repentance. This demonstrates the authenticity of his prophetic work, because without repentance no one can return to God. For this reason all the Prophets preach repentance. Preaching repentance proves the Prophet's authenticity.
What exactly did Samuel say to the people at that time? "Then Samuel spoke to all the house of Israel, saying, 'If you return to the Lord with all your hearts, if you put away the foreign gods and the sacred groves from among you, and if you prepare your hearts for the Lord and serve Him alone, He will deliver you from the hand of the Philistines'" (1 Kg./1 Sam. 7:3). This extract shows all the features of sin, but also of true repentance.
Curing the People
Samuel not only teaches the people but proceeds to help them personally. He prays to God and cures the people in this way. The true leader does not limit himself to identifying certain problems, but takes on the therapeutic ministry. To cure in this way entails great personal sacrifice. The model of this ministry is Christ, Who was not content with teaching but proceeded to the sacrifice.
Samuel promises that he will pray: "I will pray to the Lord for you" (1 Kg./1 Sam. 7:5). This promise shows the way in which he will cure them, and also the hope that spreads among the Israelites. In fact, nothing gives us more hope than knowing that people are praying for us.
Judging the People
With his teaching and therapeutic work, Samuel also understood the task of judging. He sat in judgment and judged the people. As a Judge he settled the disputes that arose between them. This was a task he performed throughout his life, as did all the Judges. We read, "And Samuel judged Israel all the days of his life" (1 Kg./1 Sam. 7:15). Guiding and curing the people is connected with solving their judicial differences.
Those who are inspired, the deified, and discerning spiritual fathers can identify problems and solve all the disputes that exist between people. They can distinguish between God's will from man's will, and especially from the will of the demons, who act through human passions. For this reason, we ought to resort to them to solve our differences. They give correct and saving solutions which set the heart at rest. This explains why, even today, many people resort to such blessed figures to solve problems. Not only are they detached from our problem, but they are illuminated by God and offer effective help.
Conclusion
This was the threefold task of Samuel: he taught, cured through his prayer and judged the people. In these three activities it is clear he is a Prophet, Priest and Judge. Every Christian also possesses these three characteristics through their Baptism and their ecclesiastical life as a whole. We ought to put them to good use. We should rekindle the gift of grace that we have received, so that we can help those we have under our authority, whether we are national leaders or parents or shepherds of the people.
These gifts of grace, this threefold task, are mainly exercised by the shepherds of God's people, who are the clergy and particularly the bishops. Of course, if they are to perform this task correctly, they must activate the gift they have received and participate in God's holiness, in His deifying energy. We ought not to regard the clergy simply as Church officials, but as shepherds. Nor should we regard them as civil servants within the state machinery, but as leaders who guide the laity to salvation. The clergy, however, must perceive this themselves. Samuel is thus an example of a real shepherd
Excerpted from the book The Seer: The Life of the Prophet Samuel and Its Relevance Today, ch. 9.
John at 1:06:00 PM
Share
‹
›
Home
View web version