The Cave of the Seven Sleepers In Paphos, Cyprus? 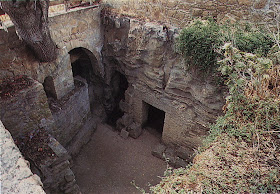 We know the original cave of the Seven Sleepers is in Ephesus, therefore the location of the cave of the Seven Sleepers in Cyprus remains doubtful even if it is often reported that it is found in Kato Paphos. Many mistakenly suppose that it is the catacomb of Saint Solomone, confusing the Seven Sleepers with the Seven Maccabee children who were martyred together with their mother, Solomone. The cave of the Seven Sleepers is obviously an ancient cave found near this area, but is not the catacomb of Saint Solomone.
In 1590, the French traveler Andre Thevet, impressed by the religious retrospections that the ground of Paphos offered, also reported about the story of the Seven Sleepers. He writes the following about the grave of the Bishop of Paphos Sarprikios: "His grave was shown to me and is close to the castle of Kato Paphos, inside a deep cave at the place of worship which the people of Cyprus called the cave of the Seven Sleepers."
The English traveler F. Moryson who visited Cyprus one year later, in 1591, also writes about the same topic: "One mile from the city of Paphos, towards the seashore, a very deep cave is situated where it is said that seven saints slept for over 300 years without waking up. The Cypriot people believe that they are still alive".
The Cypriot monk and intellectual Neophytos Rhodinos (1580-1659) writes that in this cave there are many saint relics, but these relics belong to the Seven New Martyrs who are local Saints and not those of Ephesus.
The legend of the Seven Sleepers was very widespread in Cyprus in older times. Today it is not well known by the Cypriots. Badly damaged wall paintings in the right part of the cave date from the 9th-12th centuries. The attention of visitors is also attracted by kerchiefs and pieces of cloth tied to the tree at the entrance to the catacombs. It is said that anyone who fastens a piece of his or her clothing to the branches of the tree is cured of chronic illness.
John at 11:16:00 AM
Share
‹
›
Home
View web version