Saint Phantinos the Younger of Calabria, Wonderworker of Thessaloniki

Verses
Phantinos the wonderworker entered the earth,
From above he rains down upon us miraculous manna.
On the thirtieth the life of Phantinos ended.
Saint Phantinos was from Calabria in Italy and was born in the year 902. His father was named George and his mother was Vryaini. From childhood he dedicated himself to God, and when he reached eight years of age he entered the monastery of Saint Elias and became his disciple. There he undertook the labor of acquiring the virtues. He was tonsured a monk and served as the cook of the monastery. And although he was continuously around food, in the second year of his monastic life he only ate once a week some raw vegetables and legumes. Having conquered gluttony and thoroughly purified himself of his passions, he was elevated to serve as ecclesiarch.
Following the repose of Saint Elias, Phantinos, after twenty years of obedience in the monastery, was made worthy of the gift of discernment and divine revelations, and decided to live an eremitic life in Lycaonia of southern Italy. There the devil tried to frighten him away from the place with noises and snakes, and even took on the appearance of his parents, but Phantinos remained unmoved and vanished his temptations with the sign of the cross. There he continued to struggle amidst great hunger and deprivation, to the point where his clothes withered away and he remained naked, even through the winter which nearly made him freeze to death. He struggled like this for eighteen years.
One day certain hunters came to the place where Phantinos struggled in ascetcism, and recognized him. So they returned and told his parents, who went to meet him and there they had a tearful reunion. He then convinced them to embrace the monastic life, and after they distributed their belongings to the poor they joined their son. Phantinos therefore built one monastery for his mother and sister, and another monastery some distance away for his father and brothers Luke and Kosmas, and he became to all of them a spiritual father in the solitary life. But soon the mountains became like cities, so many followers did he attract, and this brought him to seek solitude every so often, but returned to his monastery to lead the brethren.
When he reached 60 years of age, by divine revelation he departed for Thessaloniki due to a coming invasion of Saracens, in order to inspire the people there towards a life of virtue. He therefore departed for Greece with two of his disciples, Vitaly and Nikephoros. Passing through Corinth, Athens and Larissa, where he stayed for some time at the tomb of Saint Achilleos, he eventually arrived at Thessaloniki. There he faced many hardships, but also worked many miracles and spoke various prophecies. After eight years there, he reposed in peace at the age of 73 in the year 974. And soon after his repose, he continued to work many miracles.
Read also: Βίος καὶ Πολιτεία τοῦ Ὁσίου Φαντίνου τοῦ Νέου 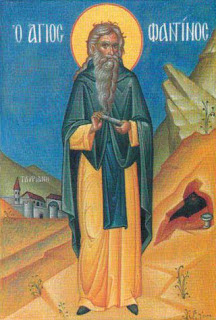 Apolytikion in the First Tone
The boast of Calabria and great sun of monastics, and protector of Thessaloniki, you were seen to be divinely-wise Father, taking up as a child the cross, you sought God O Phantinos, and by withdrawing you became marvelously enriched, with the gift of wonderworking: Glory to Christ Who sealed you, glory to Him Who made you wondrous, glory to Him Who gave you to us as a mediator and teacher.
Kontakion in the Third Tone
From the womb O Saint, you were dedicated to God, and for Him as a forefunner, you praised Him with hymns before your birth, then you departed from your homeland, parents and friends, and divinely illumined many from error, by your exceedingly great asceticism, and miracles, all-venerable Phantinos.
Megalynarion
As an offshoot of Calabria, O wonderworker Phantinos, you sanctified all of Greece, with the grace of the Lord by your asceticism, and you rest in Thessaloniki.
John at 12:48:00 PM
Share
‹
›
Home
View web version