Verses
The victory of honor you received O Nicholas,
Behaving in an upright manner in the trenches of asceticism.
Saint Nicholas was born and raised in Sicily some time prior to the 12th century. From a young age he dedicated himself to God and longed for the monastic life. For this reason he withdrew from his homeland and came to Evia in Greece to find a place to live in asceticism. There he found a rough area, a gorge near the sea, where there was a Monastery of the Theotokos, and there he submitted himself to the abbot.
After a short stay in the Monastery, he longed for a life of hesychasm and intense spiritual struggle, so with the blessing of the abbot he went to Mount Neotakos (today called Skoteini) to the Metochion of Dirfyos, an inaccessible place. A vision of light indicated to him where he was to construct a church dedicated to Saint Nicholas of Myra. However, although the place was located above a river, there was no water to drink. Therefore the Saint prayed, and after striking a rock water spurted, to the glory of God, and this water flows to this day.
With the help of monks from the Monastery of the Theotokos at the gorge, he built the church, and around this church cells were built, making it into a monastic complex. The radiance of the virtues of the Saint drew many to seek his guidance in the spiritual life. And to secure the sanctity of the place and make it a safe harbor of salvation, it became avaton (inaccessible to the opposite sex).
It is said that one day when the Saint was sitting at the well, while he was in a state of prayer, a bird came and caused him annoying interference, for which the Saint rebuked the bird with the sign of the Cross, and it immediately turned to stone. Another time certain Muslim pirates came to Evia and docked near the Monastery of Neotakos. They captured the Saint with other monks and they were forcibly brought to their ship. A severe storm then struck and the ship was in imminent danger of sinking. At the same time the pirates lacked water and were in need of drink. Saint Nicholas therefore knelt down and prayed, and the storm immediately subsided, while the salty water turned into sweet drinking water. With these miracles the pirates were amazed, recognized his holiness, and returned the prisoners back to the Monastery.
After living a life pleasing to God and having pastored his flock by his brilliant example, Saint Nicholas departed to the Lord in an unknown year on August 23rd. He was buried at the right side of the church, as he himself indicated in the rule of the Monastery: "Brothers and Fathers, if you do not depart from here, nor will I withdraw, neither in the present age, nor in the future."
After many years the Monastery was abandoned and the location of the Saint's grave was forgotten. In 1853 a child from Glyphada had a dream in which the location of the Saint's grave was indicated to him. Going to the Metochion of Dirfyos they found the sacred relic of the Saint, and the Church of Saint Nicholas was built to house the sacred treasure. Locals celebrate his memory annually on August 23rd, and his holy relics continue to work many miracles. 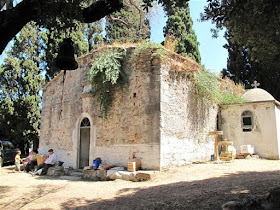 Apolytikion in the First Tone
You lived as an angel on Mount Neotakos, by your ascetic conduct, God-bearing Nicholas, and were a light to all of Evia, shining with venerable virtues, for this reason your sacred memory we honor, crying out: Glory to Him Who gave you strength, glory to Him Who crowned you, glory to Him Who works through you all manner of healings.
Kontakion in Plagal of the Fourth Tone
As an infant you were dedicated to God, and were shown to be a shining luminary of Evia O wise one, called the boast of the Venerables, founder of Mount Neotakos, the divine support of ascetics, and most-ready intercessor of those who honor you, for which we cry: Rejoice, Father Nicholas.
Megalynarion
Rejoice, delightful offshoot of Sicily, adornement of Evia, dwelling-place of virtue. All-blessed Nicholas, treasury of love, our Evia, remember O Father.
John at 10:27:00 AM
Share
‹
›
Home
View web version