Saint Mikallos is one of the three hundred saints who came to Cyprus in the mid-12th century after the Second Crusade (1147-1149).*
As for the childhood, parents and hometown of the Saint, we have no information. What we first learn about him is that when he was young, he sought a better life and decided to emigrate. He went to Germany and worked as a laborer with other Greeks. There one day he heard a stirring sermon calling for the Christians to help liberate the Holy Land from the Muslims. Soon many people gathered and created a large army. This army of the Second Crusade was dissolved in Yugoslavia. Among the various armies were the 300 Greeks led by a man named Auxentios. After an enthusiastic speech to his men, he convinced them to go on towards the area of the Jordan where they could live an ascetic life, completely dedicating themselves to God.
This proposal was accepted with enthusiasm. After they said a prayer, they made their journey. First they venerated the holy places in Jerusalem. Then they went to the desert of the Jordan where they lived a life of solitude, asceticism and prayer, studying the Scriptures and aiding those who had need. However, soon the enemies of Christ in those regions began to harass these three hundred ascetics. Disturbed by this, the three hundred decided to depart that place and headed for the sea, where they found a ship that would take them to the most-pious island of Cyprus. After disembarking at Paphos, which according to tradition was due to a large storm, the three hundred ascetics scattered to different parts of the island, each finding their own place of solitude.
This is how Saint Mikallos came to Akanthou, where he found two caves that exist till today, and there he lived a life of prayer and fasting and vigil and sought the path of virtue. 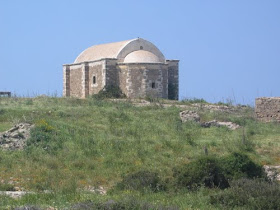 Pantelis Pantelidis in his book Akanthou: Where Legend Meets History (Nicosia, 1984), writes the following about the Saint:
"When their ship was passing from the seashore of Akanthou, the Saint fell into the sea, caught himself on a large log and reached the shore which is about half a mile from the small settlement of Pergamos. Life on this shore was possible with the small amount of water which runs there up to the present day. The Saint cultivated some vegetables, lived by eating wild plants and vegetables, and led a life of asceticism and prayer. He lived there for only nine months and was buried by Christians from the nearby settlement in a grave prepared by himself.
In the mid-19th century, Paraskevas Kallousias (the Kallousias are a big family today) was the owner of the coastal region and was cultivating a small vegetable garden. Once he saw in a dream that behind the bushes of the running water, the tomb of the Saint was to be found.
The bushes were cleared and behind them a natural stalactite cave was found. At the distance, inside the cave, there were blocks of colored rocks and the remains of a dead person. It is said that the name of the Saint was written on a rock. The rocks were heavy and were removed with pulleys. The cave was cleared of the rocks and a carved stone was placed at its entrance, where an lit oil lamp was placed. The water of the stalactites is believed to be the holy water of the Saint.
Among the bushes there was a myrtle tree that was not cut during their clearing. Hadjittofis and Phytouras (also large families today) offered to pay for the cost and commissioned the building of the Church of Saint Mikallos to Ttofas Karpasitis, who during those years, lived in the village of Akanthou (1864). 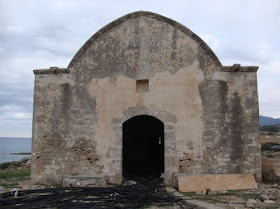 It is believed that Saint Mikallos cures leprosy and "warmth" as malaria was called in Cyprus. Mothers who had children sick with malaria, took them to Saint Mikallos, where they showered them with holy water, and cut strips from the children's clothing and tied them on the branches of the myrtle tree, which is still standing at the mouth of the cave."
According to tradition, in past times in Akanthou, when someone was sick he/she went to Saint Mikallos (to his chapel), lit the candles and put some oil on him/her self. Then he/she went down to where the holy water was, and after washing him/her self, he/she would leave part of his/her clothes on the myrtle tree which was called "the myrtle tree of Saint Mikallos".
Also mothers when they breastfed their children, but had no milk, would go to the stalactite cave with faith, and would use the stalactites to feed their children, calling upon the help of the Saint, which they received richly. It is also said that an ineffable fragrance exuded from the cave, and it could be smelled by the farmers in the fields of Akanthou.
After the Turkish invasion of Cyprus in 1974, the Church of Saint Mikallos was looted and destroyed, and remains in the occupied area of Cyprus.
Notes:
* Some say the three hundred saints came to Cyprus around 638, when the Arabs took the Holy Land. 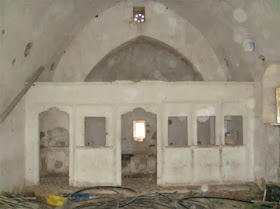 Apolytikion in the First Tone
Thou didst prove to be a citizen of the desert, an angel in the flesh, and a wonderworker, O Mikallos, our God-bearing Father. By fasting, vigil, and prayer thou didst obtain heavenly gifts, and thou healest the sick and the souls of them that have recourse to thee with faith. Glory to Him that hath given thee strength. Glory to Him that hath crowned thee. Glory to Him that worketh healings for all through thee.
Another Apolytikion in the Fourth Tone
You pleased God by your venerable voyage, divinely sweet Mikallos, making your dwelling as one without flesh in the caves of the earth, praying for and helping Akanthou of Cyprus. Intercede that the faithful may be granted heaven-sent health and peace of soul without disturbance.
Megalynarion
Rejoice, the commander of Akanthou, rejoice, cave-dweller, whose fire inflamed the pure towards love for God, as a beacon of the Venerables, beaming with your inflamed life godly-minded one.
John at 9:06:00 AM
Share
‹
›
Home
View web version