Verses
Triantaphyllos has appeared like a fresh-grown rose,
Reddened by the stream of his blood.
Little is known about Saint Triantaphyllos. Saint Nikodemos the Hagiorite simply records that he was a sailor from Zagora of Magnesia and was martyred in Constantinople when he was eighteen years of age in the year 1680. He owes his information to the Ephemerides of John Karyophylis, the Grand Logothetes of the Ecumenical Patriarchate who authored a number of lives of the early Neomartyrs of his time.
According to his Bulgarian Life, where he is known as Triandafil, he was born in the village of Stara Gora of Bulgaria in the year 1663. For reasons we do not know, he was pressured by Muslim sailors to embrace the Islamic faith in Constantinople, but he refused saying, "I am an Orthodox Christian and will not deny my Savior Christ." This resulted in his beheading in the Hippodrome of Constantinople on August 8, 1680.
Saint Triantaphyllos is especially honored in Zagora and Alykes in Volos, Greece. A portion of his relics can be venerated at the Monastery of Saint Nicholas in Andros, where there is also an icon of him kneeling on the beach. 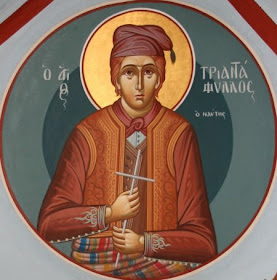 Apolytikion in the Third Tone
Having the grace of divine faith, you rejoiced in your contest, bravely-minded Neomartyr of Christ Triantaphyllos, wherefore as a rose in the pleasant wind you make glad, the Church by your divine contest. Glorious Martyr, entreat Christ God, to grant us the great mercy.
Kontakion in the Fourth Tone
Having shown yourself to be, O Holy One, an unconquerable athlete of piety, overthrowing the hostile; wherefore Christ glorified you, Triantaphyllos, with the grace of martyrdom.
Megalynarion
Rejoice, contestant on behalf of Christ, with an eager heart, O Athlete Triantaphyllos; rejoice, ornament and boast of Zagora, who have you as a protector and guardian by your entreaties. 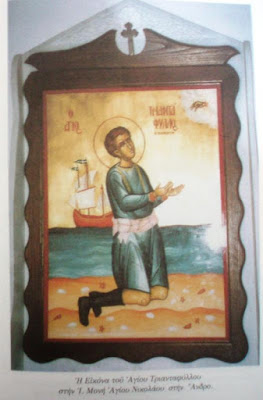 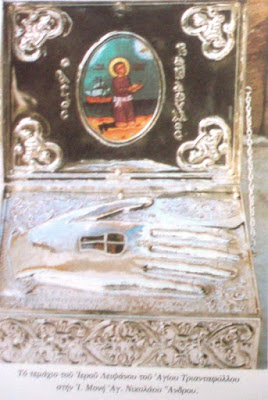 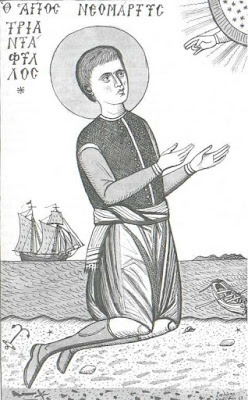