On the twenty-seventh of this month [June], we commemorate the Holy and Glorious Hieromartyr Cyril Loukaris, the former Pope and Patriarch of the Great City of Alexandria, then became Archbishop of Constantinople and Ecumenical Patriarch, who competed in the contest in the year 1638.
Verses
The sacrificer of the Lord is sacrificed,
Strangled by the madness of the descendants of Hagar.
On the twenty-seventh Cyril victoriously ventured to heaven.
Cyril was a true imitator of the Patriarchs and an honorable Martyr of the King of Glory. He was born in Handaka (modern Heraklion), Crete in the year of our salvation 1572 to pious and distinguished parents. There he received a well-rounded education, where he learned under the distinguished, most-wise and renowned Hieromonk teacher Meletios Vlastos, then he yearned first for a broad education in Venice, then sought understanding in Padua, giving himself over to learning external and internal wisdom, greatly amazing his teachers, he was a model to them of virtue and piety by exhibiting all these things.
After many years of establishing knowledge and wisdom, he left his home and forsook worldly things, and went to the renowned Agarathos Monastery, to put on the garment of the philosophy of Christ. Having stayed there a short time, he departed for Alexandria, where he was ordained a Deacon and Presbyter, and received the office of Chancelor, at the holy hands of our Holy Father Meletios Pegas, who venerably and righteously served as Patriarch of Alexandria, and he succeeded him, after he had reposed among the saints in 1601.
He shepherded the rational flock of the Lord in Alexandria in a God-loving manner, and by divine bidding was chosen in the year 1620 to be the Archbishop of Constantinople and Ecumenical Patriarch. Ruling five times as patriarch he bravely struggled on behalf of piety, facing numerous afflictions, persecuted by associates abroad, and appearing to be esteemed by all, at the envy of the Latins he was slandered to the sovereign Hagarenes, arrested by the blood-thirsty Janissaries, and putting him on a ship they arrived outside the city, in a place known as Agios Stephanos, and they strangled him beside the shore on the 27th of June in the year 1638, then cast his martyred body into the Bosporus Sea. By divine power his body was saved from the depth of the sea by the hands of pious seamen, and was honorable buried on an island in the gulf of Nicomedia called Agios Andreas, in the Monastery of the same name. Later his honorable relic was translated to Halki to the Monastery of the Most Holy Theotokos the Kamariotissa, and returned by the blessed Ecumenical Patriarch Demetrios I to the ancient and revered Monastery of the Most Holy Theotokos known as Agarathos, in the year 1975, where he is kept until today, sanctifying the faithful who flee to him.*
Note:
* Hieromartyr Cyril Loukaris, immediately after his martyric death, was honored by the Church as a Saint and Martyr. Saint Eugenios the Aitolos (Aug. 5) composed a Service in his honor in order for him to be commemorated. The official canonization took place by the Holy Synod of the Patriarchate of Alexandria on October 6, 2009. 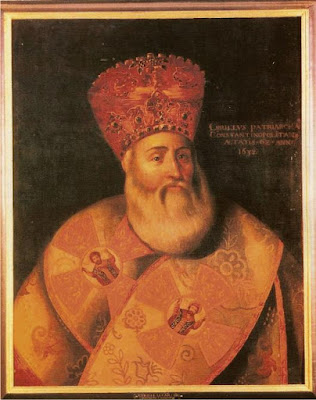 Apolytikion in the First Tone
The luminary of Crete, scion of Agarathos, shepherd of Alexandria, president of Byzantium, divine Cyril let us the faithful honor, as a firm champion of the faith, and divinely glorified communicant of Martyrs, crying out: Glory to Him Who gave you strength, glory to Him Who made you wondrous, glory to Him on high Who made you glorious, glorifying you Holy One.
Kontakion in Plagal of the Fourth Tone
Unconquerable athlete of the patriarchs, you were put to death by the envious hands of the Hagarenes, showing yourself, O Cyril, to be sown by God. Wherefore an unfading crown was conveyed to you, cease not to direct your intercessions, on behalf of those who cry out: Rejoice, much-contested Father.
Megalynarion
Rejoice, delightful flower of the island of Crete, and all-famed Chief Shepherd of Alexandria; Rejoice, Patriarch, wise man of the city of Constantine, and pillar of the Church, glorious Cyril.
John at 3:38:00 PM
Share
‹
›
Home
View web version