Synaxarion of the Holy Apostles Peter and Paul 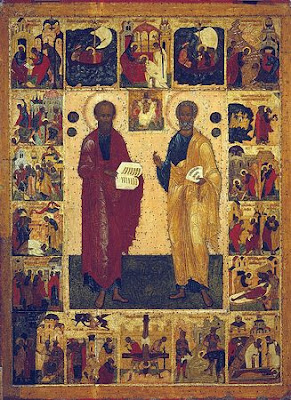 On the twenty-ninth of this month [June], we commemorate the Holy, Glorious and All-Praised Apostles the Foremost Peter and Paul.
Verses
Peter the preacher of the Cross was killed by crucifixion,
Paul was decapitated having decapitated error.
On the twenty-ninth Peter submitted to the cross and Paul to the sword.
These Foremost Apostles, what greater praise can one conceive, than the testimony and proclamation made by the Lord? The Foremost Peter He blessed, and called him a rock, upon which He decided that He would build His Church (Matt. 16:18). And He foretold that Paul would be a chosen vessel, to carry His name before kings and tyrants (Acts 9:15).
Saint Peter was the brother of Andrew the First-Called, and came from the shabby town of Bethsaida. He was the son of Jonah, of the tribe of Patriarch Simon, at the time when Hyrcanus was the high priest of the Jews. He lived in extreme poverty, and with his own hands he provided for life's needs. After his father Jonah died, Peter then took as his wife the daughter of Aristobulus, brother of the Apostle Barnabas, and bore children, while Andrew remained a virgin. When Herod had John the Baptist thrown into prison, then the Lord went to Lake Gennesaret, where He found Andrew and Peter fixing their nets, and He called them. Immediately they followed Him.
Therefore, Peter first preached the gospel in Judea and Antioch. Then he went to the areas of the Black Sea, Galatia, Cappadocia, Asia and Bithynia, and even went as far as Rome. After defeating there through miracles Simon Magus, he was crucified upside down by Nero, as requested by Peter himself, and in this way he received the unfading crown. 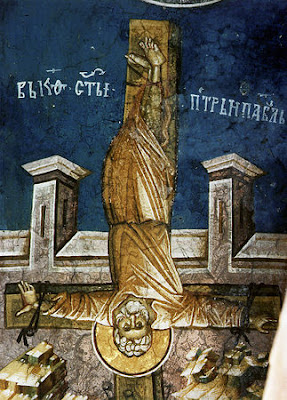 The ineffable Peter is described as having white skin, somewhat tanned, bald-headed, with the hairs he had being curly. His eyes appeared blood-red, like wine. The hairs of his head were white, as well as his beard which was shaggy. He had a long nose, lifted eye-brows, of medium height, physically upright, wise and sensible, and was sharp with divine zeal against injustice. He was forgiving towards the penitent, easily changeable, and quickly moved without fear to his initial decisions.1
Saint Paul was Hebrew by race, of the tribe of Benjamin, from Tarsus in Cilicia. He was a Pharisee, a student of the teacher of the law Gamaliel, and extremely educated in the Mosaic law. Because he was a fervent lover of the old law, he fought against the Church of Christ, and at his instigation the Protomartyr Stephen was killed. When he looked upon God, he was blinded in the middle of the day, and he heard a divine voice from above, which told him to go to Ananias the original disciple of the Lord, who lived in Damascus. After catechizing and teaching Paul, he baptized him.2
Because the ineffable Paul was a chosen vessel, he traveled throughout the inhabited earth as if he had wings. When he arrived in Rome, he taught many Greeks, and there his life came to an end, having been beheaded by Emperor Nero for confessing Christ. It is said that when he was decapitated, there ran blood mixed with milk. Although Paul was martyred after Peter, their relics were placed in the same place. 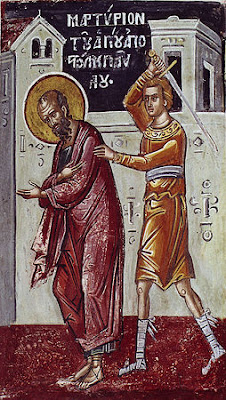 Paul is physically described as being bald-headed, with delightful eyes, his eyebrows inclined downwards, his beard was very comely and low, his nose was curved, distinguished in his face, with black and white hairs. Physically he was bent, strong and small. He was humble in his manners, sensible and full of divine gifts. He was modest in his movements and sweet in his words. He drew to his love all those who ran to him with the power of his miracles.
Both of these Foremost Apostles were full of the divine grace of the Holy Spirit. Their Synaxis and Feast is celebrated in the revered Temple of the Holy Apostles the Great, and in the Orphanage, and in the revered Temple of the Holy and All-Praised Apostle Peter, which is near the most-holy Great Church, as well as in all the local holy churches of Christ.
Notes:
1. This was seen when the Lord said to him: "Unless I wash you, you have no part with me." When he heard these words, he immediately changed, and carried out his first decision. Whereas he first said: "No, you shall never wash my feet," he changed and said to Him: "Then, Lord, not just my feet but my hands and my head as well." So from one extreme he went to another extreme, appearing fervent in both, according to Cyril of Alexandria, out of love for God however and a divine purpose. In his Dodekavivlos, Dositheos says that when Peter fled Nero, the Lord met him and told him he was going to Rome to be crucified a second time. When Peter understood the riddle, he returned to Rome, and was crucified head-down, and buried in the Vatican along what is called the Aurelian Way.
2. The year of the conversion of the Apostle Paul is discussed by many. Neither Luke mentions this in Acts, nor does Paul himself say anything in his Epistles. It is said that the most precise year when the Apostle Paul converted to the Christian faith, was in the thirty-sixth year after Christ, or three years after His Ascension, even less. This was the twenty-first year of Tiberius Caesar, when there was a war between Herod the Tetrarch of Galilee and Aretas the King of Arabia. 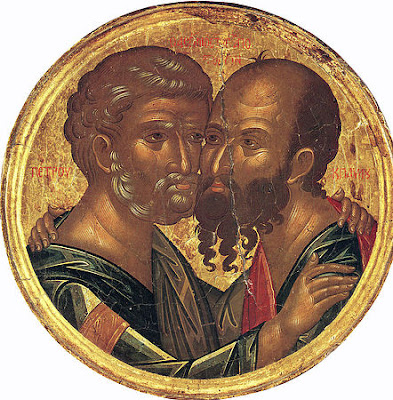 Apolytikion in the Fourth Tone
Foremost of the Apostles and teachers of the world, pray to the Master of all to grant peace to the world and great mercy to our souls.
Kontakion in the Second Tone
Thou hast taken the firm and divinely inspired Preachers, O Lord, the foremost Apostles, for the enjoyment of Thy blessings and for repose. For Thou hast accepted their labours and death as above every burnt offering, O Thou Who alone knowest the secrets of our hearts.
John at 1:09:00 PM
Share
‹
›
Home
View web version