Saint Paisios the Athonite and the Airline Ticket of St. Maximos of Kavsokalyva 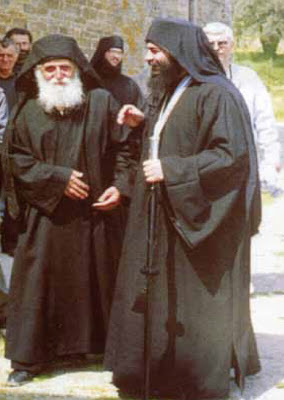 By Metropolitan Athanasios of Limassol
One night when I stayed there close to the little hut [of Elder Paisios] I was sad, because our Elder Joseph was in Cyprus, in a Monastery they were trying to fix, and I had not heard from him. He was slow to write me a letter and I was worried.
The Elder told me: "What is it that is making you so thoughtful?"
I said: "I haven't heard from Elder Joseph and I have a worry within me."
"Well, poor man, why are you thinking? Let's purchase a ticket and go."
"Gladly, let's go."
He said to me: "With what airline do you want to go? With Olympia?"
"Yes, Olympia."
"Okay," he said to me, "let's ask when there's a flight and we will go to Cyprus."
"Okay, Elder."
"But," he said to me, "we will go with the ticket of St. Maximos of Kavsokalyva."
"Meaning?"
"What meaning? He would eat a piece of dried bread and would travel from Kavsokalyva to Vatopaidi, flying. Tonight we also will eat a piece of dried bread and go to Cyprus."
"He's joking," I said to myself. We actually ate our dried bread, and I went to sleep while the Elder prayed. In the morning, when I woke up, he was already at the foot of my bed.
"How did it go yesterday?" he asked.
"Good."
He said: "The Monastery is beautiful there."
"Yes, Elder, beautiful," I told him.
He then described to me with every detail the place where Elder Joseph was staying, his cell, his office, even to the point of saying exactly where his pen was, his knife, his slippers, everything.
"Elder, how do you know this?" I asked.
"When the plane passed by here, I came to get you but you were sleeping, so I went alone. You lost the ticket. I went myself and returned this morning."
Such was his entire life.
Source: From Paraklesi, Metropolis of Limassol, July-August 2012, p. 3. Translated by John Sanidopoulos.
John at 12:08:00 PM
Share
‹
›
Home
View web version