Verses
Just as Joanna stood beside the tomb,
So also she stands beside the throne in the eschaton.
Joanna the Myrrhbearer was the wife of Chouza and the steward-administrator of King Herod Antipas. She is listed as one of the women, along with Susanna, Mary Magdalene, and others, who "had been cured of evil spirits and infirmities" who accompanied Jesus and the Apostles, and "provided for Him from their substance" in Luke 8:2–3.
In Luke 23:55-24:11, we have the story of how these same women went to the tomb of Christ as Myrrhbearers to finish the job of embalming Jesus' body, which was hastily begun by Joseph and Nikodemos. They were perplexed when they found the tomb empty except for the grave clothes. An Angel appeared to them and proclaimed the Resurrection of the Lord. They believed and became the first evangelists of the risen Christ, and became "Apostles to the Apostles".
Although not mentioned by name, Joanna is most likely counted as one of the women who joined the disciples and Mary, the mother of the Lord, in the upper room in prayer. She was among the group of 120 who chose Matthias to fill the vacancy that was left by Judas, as well as being present on the Day of Pentecost.
According to tradition, Joanna recovered the head of St. John the Forerunner after Herodias had disposed of it (Feb. 24). When Herodias had John beheaded, she cast the head out into an unclean place. Joanna took the head and buried it with honor on the Mount of Olives, on Herod’s land. Later, in the reign of Constantine the Great, the head was found.
An ossuary has been discovered in Israel bearing the inscription, "Johanna, granddaughter of Theophilus, the High Priest." Whether this is the same Joanna as the Myrrhbearer is unknown. 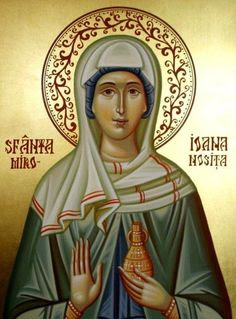 Kontakion in the Fourth Tone
When Thou didst speak to the Myrrhbearing women with joy, Thou didst end the wailing of Eve the first mother, by Thy Resurrection, commanding Thy disciples to proclaim that the Savior is risen from the tomb.
John at 10:17:00 AM
Share
‹
›
Home
View web version