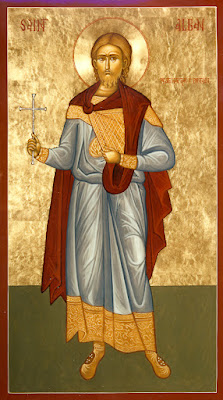 Below is Venerable Bede's account from The Ecclesiastical History of the English People (1. 7) of the Martyrdom of Alban, probably under the Diocletian persecutions in the year 304. Alban was the first British Christian martyr.
By Saint Bede the Venerable
During this persecution, one of the most illustrious of those who suffered death for the faith, was Saint Alban, of whom the Priest Fortunatus, in the book which he wrote in commendation of Virgins, speaking of the great number of martyrs who were sent to heaven by it from every part of the world, says,
Albanum egregium fæcunda Britannia profert.
(Fruitful Britain holy Alban yields.)
He was yet a Pagan, when the cruel Emperors first published their edicts against the Christians, and when he received a clergyman fleeing from his persecutors into his house as an asylum. Having observed that his guest spent whole days and nights in continual praying and watching, he felt himself on a sudden inspired by the grace of God, and began to emulate so glorious an example of faith and piety, and being leisurely instructed by his wholesome admonitions, casting off the darkness of idolatry, he became a Christian in all sincerity of heart.
And, when he had exercised his hospitality towards the before-mentioned clergyman, for some days, a report reached the ears of the impious prince, that the confessor of Christ, to whom the glory of martyrdom had not yet been granted, was concealed in Alban’s house: upon which, he commanded some soldiers to make a strict search after him. When they came to his house, Saint Alban immediately presented himself to them, dressed in the clothes which his guest and instructor usually wore. Now it happened that the Judge, at the time when Alban was carried before him, was standing at the altar, and offering sacrifice to the Demons. And, when he saw Alban, being much enraged at his having presumed, of his own accord, to deliver himself into the hands of the soldiers, and incur the danger of being put to death, he ordered him to be dragged to the idols of Devils, before which he stood, saying, “Because you have chosen to conceal a rebellious and sacrilegious person, rather than to deliver him up to the soldiers, that he might suffer the punishment due to him, for despising and blaspheming the gods — you shall undergo all the punishment, which was to have been inflicted on him, if you refuse to comply with the rights of our religion.”
But Saint Alban, who had before voluntarily professed himself a Christian to the persecutors of the faith, was not the least intimidated at the prince’s threats; but, being armed with the armor of the spiritual warfare, plainly told him that, he would not obey his commands. “Then,” said the judge, “of what family or descent are you?” “What does it concern you,” answered Alban, “of what family I am? But if you desire to hear the truth of my religion, be it known unto you, that I am now a Christian, and employ my time in the practice of Christian duties.” “I ask your name?” said the judge, “which tell me immediately.” “I am called Alban by my parents,” he replied, “and ever worship and adore the true and living God, who created all things.” Then the judge, in a rage, said, “If you will enjoy the happiness of eternal life, do not delay to offer sacrifice to the great gods.” To which Alban answered, “Those sacrifices, which you offer to devils, can neither avail the offerers any thing, nor obtain for them the effect of their petitions; on the contrary, whosoever offers sacrifices to these idols, shall receive the eternal pains of hell for his reward.” The judge, on hearing him say these words, was exasperated even to fury. He therefore ordered the holy confessor of God to be scourged by the executioners, thinking that stripes would shake that constancy of heart which words could not affect. But he bore the greatest torments for our Lord, not only patiently, but joyfully. 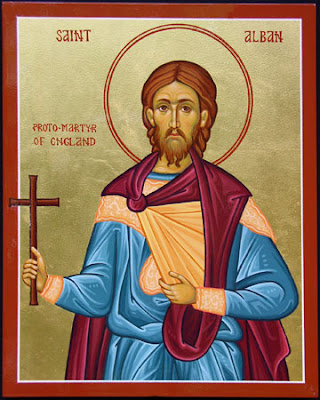 When the judge perceived that he was not to be overcome by tortures, or withdrawn from the profession of the Christian religion, he sentenced him to be beheaded. Being led to execution, he came to a river, which was divided at the place where he was to suffer with a wall and sand, and the stream was very rapid. Here he saw a multitude of persons of both sexes, and of all ages and ranks, who were doubtless assembled by a divine impulse, to attend the most blessed confessor and martyr; and had so occupied the bridge on the river, as to render it almost impossible for him and all of them to pass over it that evening. Almost every body flocking out of the city to see the execution, the judge, who remained in it, was left without any attendance.
Saint Alban therefore, whose mind was filled with an ardent desire to arrive quickly at his martyrdom, approached to the stream, and, lifting up his eyes to heaven, addressed his prayer to the Almighty; when, behold, he saw the water immediately recede, and leave the bed of the river dry, for them to pass over. The executioner, who was to have beheaded him among the rest, observing this prodigy, hastened to meet him at the place of execution; and, being moved by divine inspiration, threw down the drawn sword which he carried, and prostrated himself at his feet, earnestly desiring that he might rather suffer death, with or for the martyr, than be constrained to take away the life of so holy a man. Whilst he of a persecutor became a companion in the true faith, and the rest of the executioners hesitated to take up the sword from the ground, the most venerable confessor of God ascended a hill with the throng.
This very pleasant place was about half a mile from the river, enamelled with a great variety of flowers, or rather quite covered with them; where there was no part very steep or craggy, but the whole of it was levelled by nature, like the sea when it is calm: which beautiful and agreeable appearance seemed to render it fit and worthy to be enriched and sanctified with the martyr’s blood. When Saint Alban had reached the summit of this hill, he prayed to God to give him water; and immediately, an ever-flowing spring rose at his feet, the course being confined; so that every one might perceive that the river had been before obedient to the martyr. For it could not be supposed that he would ask for water at the top of the hill, who had not left it in the river below, unless he had been convinced that it was expedient for the glory of God that he should do so. That river, nevertheless, having been made subservient to the martyr’s devotion, and performed the office which he enjoined it, returned; and continued to flow in its natural course as before.
Here, therefore, this most valiant martyr, being beheaded, received the crown of life which God has promised to those who love him. But the executioner, who was so wicked as to embrue his sacrilegious hands in the martyr’s sacred blood, was not permitted to rejoice at his death; for his eyes dropped to the ground at the same moment as the blessed martyr’s head. At the same time was also beheaded there, the soldier, who before, through a divine inspiration, had refused to execute the sentence on the martyr: – concerning whom it is evident, that, though he was not baptized at the baptismal font, yet he was cleansed with the laver of his own blood, and made worthy to enter into the kingdom of heaven.
The judge then, astonished at the novelty of so many heavenly miracles, ordered that the persecution should cease immediately, beginning thus to honour the saints for their patience and constancy, in suffering that death by the terrors of which he had expected to have withdrawn them from their adherence to the Christian faith. Saint Alban suffered on the 20th of June, near the city of Verulam, now, from him, called Saint Alban’s; a church of most exquisite workmanship, and suitable to commemorate his martyrdom, having been afterwards erected there as soon as peace was restored to the Christian Church; in which place there cease not to this day the miraculous cures of many sick persons, and the frequent working of wonders.
At the same time suffered Aaron and Julius, inhabitants of the city of Leicester [or Caerleon], and many others of both sexes, in other places; who, having been tormented on the rack till their members were dislocated, and having endured various other unheard-of cruelties, yielded their souls, after the conflict was over, to the joys of the city above.
From Historia Ecclesiastica Gentis Anglorum by Saint Bede the Venerable, translated by Rev. William Hurst, 1814.

The Shrine of Saint Alban
Saint Alban's tomb was venerated as early as 429 by St Germanus of Auxerre. The town of Verulamium is either his home town or the place of his martyrdom; near it a monastery was founded, around which grew the English town of St. Albans.
The Church of Saint Pantaleon (Panteleimon) is an early Romanesque church in Cologne, Germany. It is the oldest church dedicated Saint Panteleimon west of Byzantium. The Roman Empress Theophano is buried there. Since the 10th Century, this church also holds a shrine to Saint Alban. The remains of Saint Alban probably ended up in the church after the Dissolution of the Monasteries by King Henry VIII of England in the 16th century. In 2002, a collar bone, one of the relics in the shrine, was moved to Saint Albans Cathedral in St. Albans, England, and placed in the shrine to Saint Alban there.
Apolytikion in the Fourth Tone
Thy holy martyr Alban in his struggle, has gained the crown of life, O Christ our God; for strengthened by Thee and with a pure heart, he spoke boldly before worldly judges, giving up his sacred head to Thee, the Judge of all.