Saint Prokopios came from the village of Varna in Bulgaria, and at the age of twenty went to Mount Athos to live as a monk in the Skete of Saint John the Forerunner, under the guidance of Elder Dionysios.
Later, for reasons unknown to us, Prokopios abandoned the monastic life of Mount Athos and went to Smyrna, and there he became a Muslim in his despair of abandoning his monastic profession. There he was educated in Islam by the head Janissary of Smyrna who, after fifteen days, had Prokopios circumcised.
But once this took place, his conscience was pricked and he tearfully repented of his action. After confessing his sin to a priest, he revealed that he wanted to shed his blood for his Christian faith to complete his repentance. The priest tried to persuade him to return to Mount Athos, where through his repentance and asceticism he can receive the mercy of God, and he also feared that Prokopios would once again recant his faith in the face of torture.
For fifteen days Prokopios lived under the guidance of this priest and was strengthened in his faith and resolve to die a martyric death. On the fifteenth day, a Saturday, Prokopios told the priest: "Today is my last day. I have decided to testify and to bid my farewell." After they chanted together the Supplicatory Canon to the Theotokos and spoke their last words, Prokopios put on his Turkish clothing and presented himself before the Ottoman courts. 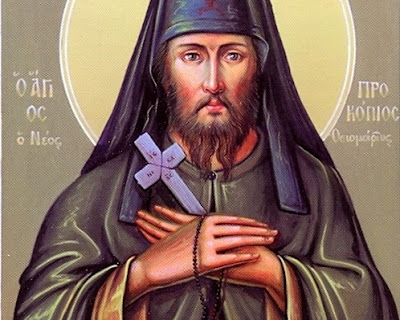 Standing before the judge, Prokopios threw off his Turkish headdress and and put on his monastic hat that he wore as a monk on Mount Athos. Then he abjured the Islamic faith as being false, and proclaimed Jesus Christ as true God. Although the judge tried to persuade him to return to Islam with promises and flatteries, which then turned to threats, Prokopios remained steadfast in his faith. For this reason it was ordered that he be beheaded.
On his way to the site of the execution, Turks derided him and shamed him, but the Holy Martyr ran with eagerness and joy to his death, saying farewell to all the Christians he encountered along the way. At the place of execution, he stood with courage and boldness, so that none of the Turkish executioners would approach to behead him. Consequently, they brought forward a former Orthodox Christian who had converted to Islam, and he beheaded the Saint. In this manner Saint Prokopios received the unfading crown of martyrdom on June 25, 1810.