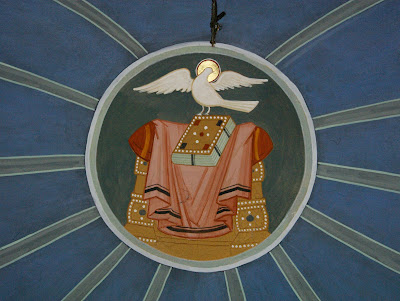 ...continued from part two.
So What are the Limits/Boundaries of this Church?

And for the Holy Fathers and many Theologians[31] today, it is not possible to equate the canonical and charismatic boundaries of our Church, to ignore the great importance of the unlimited dimension of God's love, of the Father through the Son in the Holy Spirit, for the salvation of all people. And just as there is in God the Father and Christ and the Holy Spirit unity, so also the Church is one and unique and united before the Triune God, in Whose name all her members are baptized, acquiring justification, independently of what Confession they belong to,[32] joined with Christ and one another in one body, which may not be divided into several bodies.[33]

This is the deeper significance of the mysterious unity of the Church above, namely of the Triune God, which has consequences for the relevant contemporary situation of divided Christians: "Therefore we have the existing current ecclesiastical divisions coming from outside and below and not from inside and above, it comes from people, due to their imperfections and sins, extending above and almost disappearing before God, from which in contrast originates the internal mysterious union of the Church."[34] Karmires refers to Metropolitan Plato of Kiev, who considers the "Universal Church" (Universalkirche) as a huge Temple with many internal chapels, which are between either partition walls or separated by railings, but this separation does not reach to the ceiling, where everyone has access to heaven.[35] Continuing, Karmires finds a basis for this reality, when "the Ecumenical Patriarchate did not hesitate to set forward the famous proclamation of the year 1920, 'Unto the Churches of Christ Everywhere,' where the Christian Confessions were described as 'Churches', stressing 'that above all love should be rekindled and strengthened among the Churches, so that they should no more consider one another as strangers and foreigners, but as relatives, and as being a part of the household of Christ and fellow heirs, members of the same body and partakers of the promise of God in Christ (Eph. 3:6).'"[36] The Orthodox Catholic Church persists until today in the "ancient traditional holy patristic teaching," "relying on the compassionate, all-wise and all-powerful God who wants all people to be saved," and that those found outside the Orthodox Church and have been baptized in the name of the Holy Trinity, "and therefore have acquired justification," internally live in a state of grace, just as those who have not been baptized, but seek the true God in faith."[37]

Metropolitan Hilarion Alfeyev of Volokolamsk, the chairman of the Department of External Church Relations for the Patriarchate of Moscow, says, in reference to Saint Philaret of Moscow, that "it is beneficial for the Orthodox Christian to be in a position to discern between a heterodox and a heretic. It is less reasonable to apply to current heterodox Christians what the Fathers referred to in the era of the great Ecumenical Synods regarding the cutting off of heretics and the forbidding of communion with them. The Orthodox Christian is not allowed to forget that it is solely and only God who knows where the boundaries of the Church are.... If it is assumed that outside the Orthodox Church there does not exist or may not exist the grace of God, this would mean God's almightiness has its limits, that there are barriers to God, outside of which He has no right to act. For this reason the acceptance of Orthodoxy and the faithfulness to her doctrines should not turn into a rampant triumphalism, whereby all other Christian Churches are unfortunate assortments, made from the duplicity of people and in which all the world in general and ninety-nine percent of humanity are doomed to destruction."[38] This is how His Eminence Metropolitan Hilarion responded to the known views of Fr. Justin Popovich!

Accordingly one will question how is it Theologians and Hierarchs make it easy for so many people, outside the possibility, to partake of divine grace and to even invoke patristic theology? How can we restrict the free activity of God, namely the Holy Spirit? No Orthodox believer from any position of theology or ecclesiastical office can establish by themselves, without synodal decision, the canonical boundaries of the Church. Much less can one or several or even in the synod define the boundaries of the charismatic Church, namely where the grace of God will or may be allowed to act! These arbitrary assertions constitutes blasphemy against the Holy Spirit.

Therefore let us discard the narrow and misunderstood boundaries/limits of the Church in which divine grace is limited, and in which millions of heterodox Christians and people in general are excluded from potential to salvation. Such a view is against the design and will of God for the universal salvation of the entire human race, according to Patristic Theology and genuine Orthodox teaching. Orthodoxy is not entrenched in nor does it create a ghetto!

Consequently the Church as the ark of salvation has her earthly and terrestrial canonical and administrative boundaries, and also the limitless dimensions of the effects of divine grace, which both exceed geographically as well as time and limits. This is the Patristic Theology of the Church with open dimensions and definition, based on the unconditional and unlimited love and mercy of the Triune God.

But the zealots of Orthodoxy must know and realize, that with only one formal incorporation in the Church through baptism, without the genuine spirit and experience, there is no guarantee of either the substantial incorporation nor of salvation, because the mysteries do not act magically. This patristic view is expressed very graphically by Saint Gregory the Theologian: "Even before he was of our fold, he was ours. His character made him one of us. For, as many of our own are not with us, whose life alienates them from the common body, so, many of those without are on our side, whose character anticipates their faith, and need only the name of that which indeed they possess. My father was one of these, an alien shoot, but inclined by his life towards us."[39] The omniscient and benevolent God will judge the final result.

31. Among whom are John Karmires, George Galites, George Florovsky, Philaret of Moscow, Evdokimov, Zankow and others.