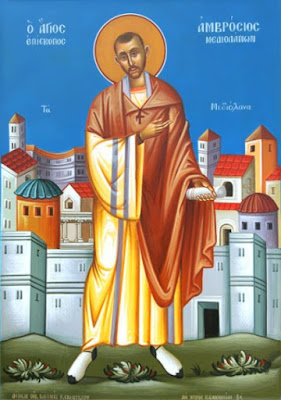 On the seventh of this month [December], we commemorate our Holy Father Ambrose Bishop of Milan.
Verses
Ambrose is stripped of his perishable flesh,
Being made worthy to partake in divine immortality.
On the seventh Ambrose arrived in the land of immortality.
Ambrose was from the great and glorious city of Rome, and was one of the royal senators. He always kept the truth in word and deed. He was familiar with the yoke and rule of justice, without making judgments and decisions by inclining in one way or another towards partiality. Rather he was upright and impartial. Hence through these virtues, he was entrusted with authority over all Italy by the pious Constantine and Constantius the sons of Constantine the Great. And although he was not perfected by Holy Baptism, but was still a catechumen, in virtue and purity of life he was no less than Christians who were perfected in Baptism and communed of Christ's Mysteries. Wherefore after the Bishop of Milan died, with the judgment and decision of Emperor Valentinian, this great Ambrose was ordained Bishop of the Church of Milan, after being baptized one day, and the next day becoming a Reader. And in turn he passed through all the ecclesiastical orders, until he reached the greatest and most perfect Hierarchy. 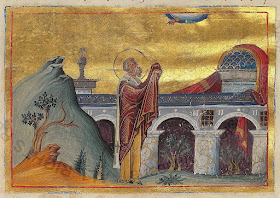 He was therefore a good shepherd of the Church of Christ, and became a fellow helper and fellow struggler of the other Fathers, who battled against the heresies of Arius and Sabellius and Eunomius. And on behalf of the revered faith he wrote various books. Even Emperor Theodosius, when he came from Thessaloniki to Milan, he prevented from entering the church, reminding him of the murders committed by him in Thessaloniki. By this he taught what is the vast difference between a cleric and a layman, even if he is an emperor, and how we must not recklessly and stubbornly dare to approach divine things. Having passed this life well, this renowned Father of the Church of Christ reposed in the Lord in good old age. His Synaxis is celebrated in the most-holy Church of Christ.1
Note by St. Nikodemos the Hagiorite:
1. Basil the Great, in his letter to Saint Ambrose, says: "Not from men have you received or been taught the Gospel of Christ; it is the Lord Himself who has transferred you from the judges of the earth to the throne of the Apostles." The Life of Ambrose was written in Greek by Symeon the Translator, which begins: "Valentinian, after the death of Jovian." 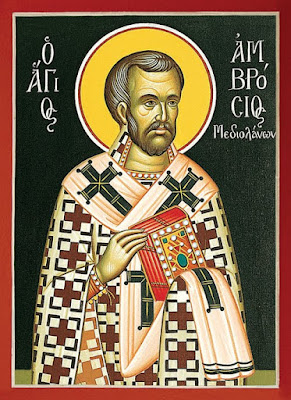 Apolytikion in the First Tone
O Ambrose, wonderworker and champion of the Church, God-bearing Hierarch: thou didst work miracles by thy faith and love for God; therefore we the earthborn glorify thee and cry out: Glory to Him Who has glorified thee; glory to Him Who has crowned thee; glory to Him Who through thee works healings for all.
Kontakion in the Third Tone
Thou didst shine with divine doctrine and blacken the error of Arius; working miracles in the power of the Spirit thou didst heal various passions. O Ambrose, shepherd and teacher, pray to Christ our God to grant us His great mercy.