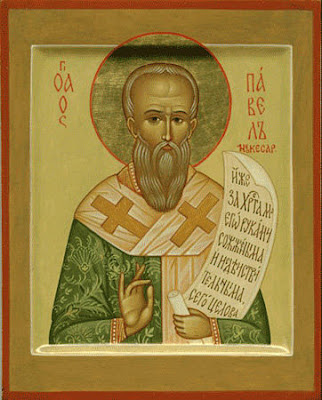 Synaxarion
On this day [23rd of December] we commemorate our Holy Father Paul the Archbishop of Neocaesarea, one of the three-hundred and eighteen God-bearing Fathers of Nicaea.
Verses
This Paul like Paul bore,
The strange marks of Christ on his flesh.
Our Holy Father Paul became so notorious for his virtues, that the fame of his name came to the ears of Licinius (308-324) who ruled from Nicomedia. Wherefore he sent men to bring the Saint before him. The tyrant first tried to frighten him with threats. When he began to beat him, then he and those gathered around were amazed by his incomparable bravery and patience. Then, according to his orders, a piece of iron was placed in the heated copper, and this iron was then placed in the palm of the Saint, and on top of this piece of iron he placed his other palm. He then forcibly squeezed his hands together for such a long time, until the red-hot iron cooled down. Due to this torture the nerves of both his hands became dead and he was unable to move them. Afterwards he had him exiled to the fortress, which is found near the Euphrates River.
When Constantine the Great came from Rome to Byzantium, all the Christians who were either in prison or in exile were set free, and each returned to their homeland. This Saint also was set free from his exile, and returned to his throne in Neocaesarea, where his virtues shined once again.
When the time came for the gathering in Nicaea of the Holy and Ecumenical First Synod in 325, he was one of the 318 God-bearing Fathers that attended. There everyone bore the marks and wounds on their bodies for Christ, as the Apostle Paul says, and they were adorned by these, and showed them one to another. One person showed their hand that had been cut off by the pagans, another their ears, another their nose, and another their eyes. And others would show other members of their bodies that were disabled or dismembered by the previous tyrants on behalf of their faith. Some showed the scars and sores that came about from being clubbed or whipped, while others showed the burn marks from being burned with iron. These thrice-blessed men endured all these things, having suffered for Christ. Thus they displayed them before all, as a bright sign of their love for Christ. This is when the blessed Paul showed where he was struck with clubs on his body, as well as his holy hands that were burned by the iron and remained immobile.
After the 318 Fathers gathered in Nicaea, where they deposed and anathematized the impious Arius, then they all went to the emperor in Byzantium. The renowned emperor Constantine held with his own hands the hands of this blessed Paul, and he kissed them. And after placing them on his eyes and other members of his body, he proclaimed these words worthy of memorial: "I can never get enough of kissing these hands, that for my Christ became dead and immobile." The renowned Paul then returned to his throne, and after living there for a few years, he departed to the Lord, and received a crown for his confession.
John at 11:04:00 AM
Share
‹
›
Home
View web version